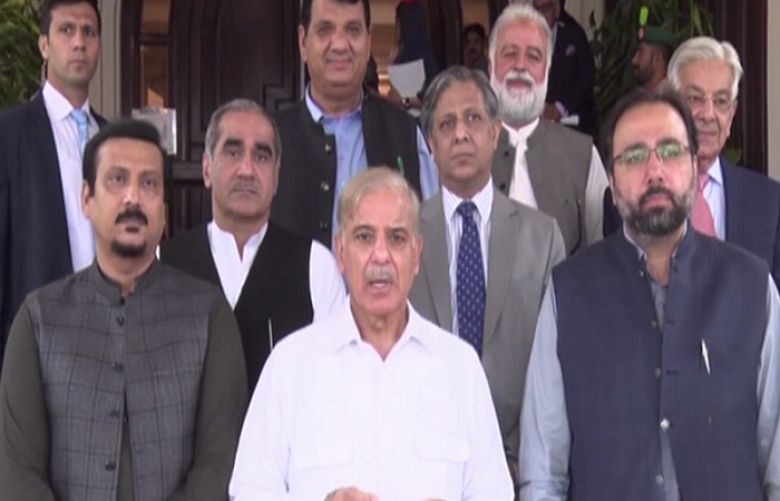 Prime Minister Shehbaz Sharif on Tuesday said that the government is ready to make more "difficult" decisions if needed, hoping that the rich people will support the nation in the tough economic situation the country is going through.

Speaking to journalists after a meeting of the federal cabinet, the premier again blamed the previous PTI-led government’s poor performance for the deteriorating economic conditions. “The previous government reduced the price of petrol and laid a trap for the next government,” he said, adding that the economic conditions are worsening across the world as commodity prices are rising.

PM Shehbaz revealed that the current coalition government is giving Rs2,000 to 700 million deserving people and that the government has imposed taxes on the rich people in the budget for the next fiscal year 2022-23.

“The previous government did not work for the betterment of the people of the country and also breached the agreement signed with the International Monetary Fund (IMF),” he said, assuring the journalists that despite all the hurdles the government will bring Pakistan out of the difficult phase.

sources said that after the much-awaited revival of the IMF programme, the premier will take the nation into confidence regarding the conditions of the agreement, clarifying that the recent hike in petroleum prices has nothing to do with the Fund.

The premier, during the meeting, said that the government raised the prices of petroleum products in line with the rising international prices.

He hoped that their talks with the IMF will be fruitful and vowed to overcome the ongoing economic crisis soon.

Meanwhile, Railways and Aviation Minister Khawaja Saad Rafique opposed transfers and postings on a political basis and said that the focus should remain on doing good work as the coalition government has come into power for a limited time.

Federal Minister for Finance and Revenue Miftah Ismail told the cabinet that the recent massive hike in petroleum prices is linked with the commodity’s global prices. He said that it was the first budget in which taxes are imposed only on the rich while relief is given to the poor.

The finance minister said that they will hold the next round of talks with the IMF’s officials today and tomorrow, assuring the cabinet that Islamabad will strike a staff-level agreement with the Fund.

According to the sources, the cabinet has also approved the issuance of Sukuk bonds which will reduce the burden of the local debts.