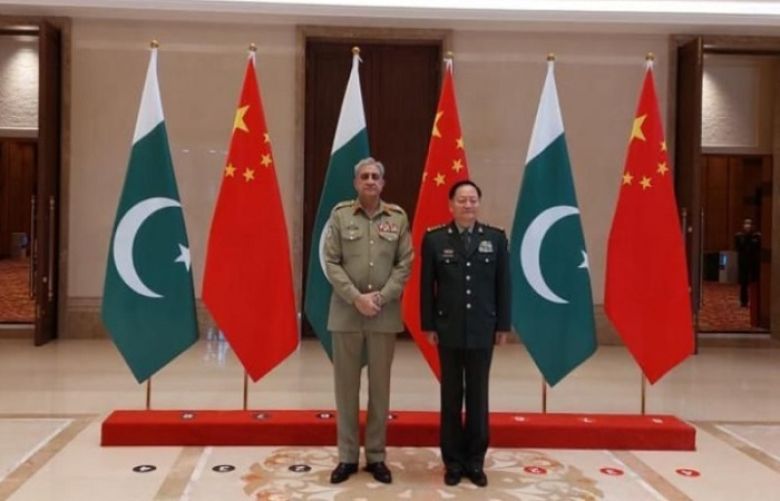 In a press release issued on Sunday, the Inter-Services Public Relations (ISPR) said that the delegation of Pakistan's armed forces visited China from June 9 to June 12.

The delegation held wide-ranging discussions with senior officials of the Chinese military and other government departments.

"[The] apex Meeting was held on 12 June wherein the Pakistani side was headed by Chief of Army Staff (COAS), General Qamar Javed Bajwa while Chinese side was led by General Zhang Youxia Vice Chairman Central Military Commission of China."

Both sides, the statement said, discussed their perspectives on the international and regional security situation, and expressed satisfaction with the defence cooperation between the two countries.

"Pakistan and China reaffirmed their strategic partnership in challenging times and agreed to continue regular exchange of perspectives on issues of mutual interest," the ISPR said, adding that both sides further vowed to enhance their training, technology and counterterrorism cooperation at the tri-service level.

Earlier this week, Chinese chargé d’affaires Pang Chunxue and Pakistani leaders met at the 7th CPEC Media Forum in Islamabad and warned of growing threats to China-Pakistan Economic Corridor (CPEC) from fake news and disinformation about the mega-development project and emphasised the need for cooperation in countering it.

“False propaganda and disinformation on CPEC are on the rise. Hostile forces are trying to undermine the development of CPEC, as well as the unity and mutual trust between the two countries,” Chinese chargé d’affaires Pang Chunxue said.

CPEC has been widely projected in Pakistan as a game-changer that would influence the region’s geo-strategic, geo-economic and geopolitical dynamics; and as an answer to its infrastructure shortcomings.

But, at the same time, media reports spread scepticism about it by pointing to the possibility of Pakistan falling into China’s debt trap, the alleged absence of transparency in the projects, and the environmental impact of the projects, especially coal-based power plants.

In that gathering, National Assembly Speaker Raja Pervaiz Ashraf, in his keynote speech, underscored the importance of CPEC, saying it was the country’s best bet for becoming the region’s geo-economic hub, but regretted that it had been “a victim of the malicious disinformation campaign” carried out by the “detractors” of CPEC and China.

Pang also spoke of the seriousness of this challenge. “False propaganda and disinformation on CPEC are on the rise. Hostile forces are trying to undermine the development of CPEC, as well as the unity and mutual trust between the two countries,” she maintained.