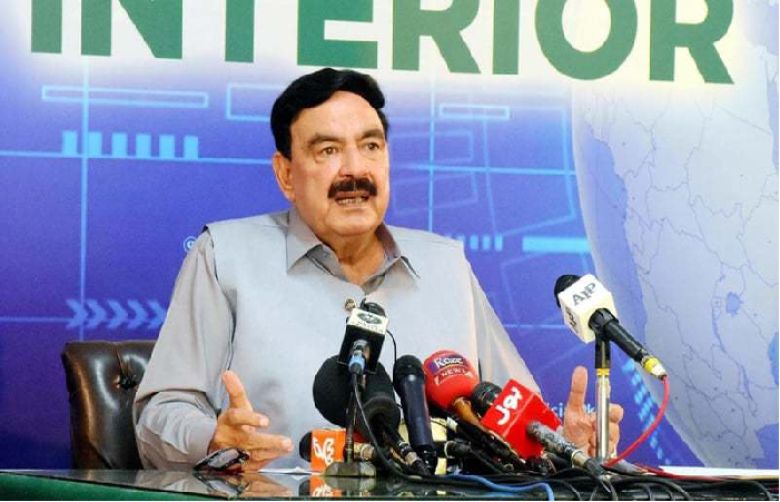 After the incident of slogan chanting at Masjid-e-Nabawi (PBUH) against Prime Minister Shehbaz Sharif and his delegation, former interior minister Sheikh Rasheed predicted that people will throw eggs at the cabinet members wherever they go.

"I predict that wherever these five people [PM's delegation] go, rotten eggs and tomatoes will be thrown at them," said the former minister, while condemning the incident. "Whatever happened at Roza-e-Rasool, shouldn't have happened."

Talking about the incumbent government, Rasheed said that they used to call the PTI government "selected" when they themselves are selected. He further said that the political situation in the country is in danger and that democracy is on the spear.

"Hatred among each other is a worrisome situation and I won't sit and watch it silently," he added.

The former minister said that the party does not demand the removal of PM Shehbaz, it only wants early elections.

"Imran Khan demands early elections and I take part in the elections if Imran Khan wants me to," he said, adding that the decision for the new government will be announced in May. "The government knows that the nation wants fair elections," he added.

The PTI leader went on to say that Imran Khan is facing a bad time and leaving him in this situation would be considered treason.

"Imran Khan has been pushed against a wall and leaving him at this time would be shameful," claimed the former interior minister.

Talking about the "foreign conspiracy" and the alleged "US-backed government", Rasheed that interference is against a country and is more dangerous than a conspiracy.

He further said that he had relations with the Pakistan Army and will keep those relations. "However, I have told them that I will stand with Imran Khan," he added. He also said that he is not against the army or Chief Justice of Pakistan (CJP) Umar Ata Bandial.

"Imran Khan will not do anything that would hurt the army or the country," said Rasheed.