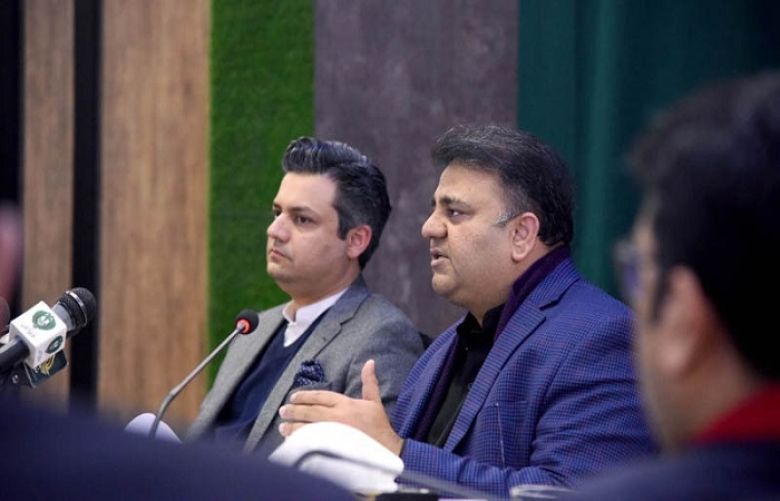 Information and Broadcasting Minister Fawad Chaudhry said on Tuesday that the federal government was obliged to abide by the court's directives regarding the sealing and demolition of the sprawling naval golf course located in Islamabad's Margalla Hills National Park area unless the court suspended its orders.

The minister said this after a federal cabinet meeting in Islamabad, while addressing a press conference alongside Energy Minister Hammad Azhar.

Chaudhry's statement comes a week after the Islamabad High Court (IHC) directed civic agencies to seal the golf course. During the January 11 hearing, it had also ordered the golf course's demolition within four weeks unless an environmentally-friendly use could be found for it.

The order was issued by IHC Chief Justice Athar Minallah in a case based on a petition filed by environmentalist Professor Zahid Baig Mirza and an appeal moved by the Monal Group against the order of a civil court related to the lease of its restaurant at Pir Sohawa.

Referring to the navy’s golf course, known as Margalla Greens Golf Club, the court had observed: “The Pakistan Navy has encroached upon state land, including the notified area of the national park by illegally establishing a golf course outside the allocated Sector E-8. Construction on the encroached land and establishing a golf course [there] was and continues to be illegal, without lawful authority and jurisdiction.”

In its order, the court said the golf course “shall forthwith be sealed and its possession handed over to CDA (Capital Development Authority) and the Islamabad Wildlife Management Board (IWMB)”, adding that all construction on the encroached land shall be demolished within four weeks, unless it can be utilised for an environmentally-friendly activity.

Earlier on January 7, he court had ruled the Pakistan Navy’s sailing club and farm houses “trespassed on the land situated on the embankment of Rawal Lake” and ordered them to be razed as well.

In a recent development, the IHC had refused on January 13 to entertain appeals filed by the Pakistan Navy challenging its recent judgements against the naval farms, sailing and golf clubs in the capital, as it observed that a branch of the military was not a legal person and any legal action it sought to initiate would have to be approved by the federal government.

During today's press briefing, the ministers also spoke about the State Bank of Pakistan (Amendment) Bill 2021 — one of the two contentious legislations that are necessary to ensure that Pakistan’s sixth review of the $6 billion Extended Fund Facility gets cleared by the International Monetary Fund’s (IMF) executive board.

It was passed by the National Assembly during an hours-long session amid fierce objection from the opposition benches last week.

Speaking on the matter, Energy Minister Azhar said the opposition had made attempts to make the bill controversial.

He said the legislation was aimed at granting autonomy to the SBP, as he drew parallels between Pakistan and developed countries.

The minister said developed nations had taken measures to ensure the autonomy of their central banks because data proved that this led to a consistent decline in inflation and persistent economic growth.

Discussing the clauses of the legislation, he assured that the federal government retained the authority to appoint the SBP's governor, deputy governors and board of directors. And the bank's board, he added, could remove the governor.

He said the government retaining the authority to appoint the board was a "concession" that was gained after "hard negotiations" with the IMF.

Turning his attention to the opposition's criticism over the bill, the minister alleged that opposition parties played politics on the matter.

He specifically spoke about the PML-N, recalling that when it was in the government in 2015, it too had passed a bill regarding the SBP.

He then read out an excerpt from the bill passed by the PML-N.

"The role of of the State Bank of Pakistan has been strengthened by substituting the federal government's approval wherever required with the board's approval," the minister read, adding that the-then federal government had surrendered its powers in favour of the board.

"We, on the other hand, have said in the legislation that the board will be appointed by the federal government," he said. "Now decide yourself which government tried to place curbs on the [SBP's] independence and which government protected it."

Azhar further said the legislation passed by the Pakistan Tehreek-i-Insaf government was in line with the demands of the country's economists who had been calling for reforms to ensure the SBP's autonomy, subject to checks and balances.

He also assured that the SBP's assets would remain the federal government's property.

After Azhar, Chaudhry said cabinet members in today's meeting were briefed on the pandemic situation in the country.

He said daily cases had reached 5,000, which translated to a 2.5-time increase in infections.

Moreover, he said, admissions to intensive care units had increased by 30 per cent.

Giving the situation, the government and the National Command and Control Centre had been stressing the importance of vaccination, he said, adding that the effect of Omicron among inoculated groups was negligible.

He claimed that Sindh was lagging behind other regions in the country in terms of vaccination.

"And we see that most Omicron cases are being detected in Karachi," the minister said, adding that the strain's prevalence was particularly high among school going children in the city.

"I will also like to mention here that the government has imported vaccines worth two billion dollars [so far, spending] a major chunk of our current account expenditure on it," Chaudhry said.

Sharing other details from the cabinet meeting, he said it had been recommended to the Senate to not include those members in standing committees who had a "conflict of interest".

"This means that a member associated with a certain industry should not be included in standing committee pertaining to that particular industry," he explained.

The minister said the cabinet was also briefed on urea production, adding that the price of urea in the international market was six times higher than the price in Pakistan.

When there was such a big gap in prices, he said, there was always a possibility of the misuse of a commodity.

"But now, urea is available in most parts of the country," he said, expressing the hope that wheat would be a bumper crop this year.

Chaudhry said the cabinet had also discussed in detail the system for the distribution on electricity and the energy minister had told the meetings' participants that this year, for the first time, the country's circular debt would begin to reduce substantially.

"It is for the first time in 24 years that the report has been presented on time and according to it, our installed capacity is 39.774 megawatts and the circular debt currently stands at 2,280 megawatts," he added.

Near the press conference's end, a reporter asked a question regarding media workers' salaries and Chaudhry's tweet about media house owners denying that media revenue had increased 600 times.

The minister had tweeted: "Media owners are saying that media revenue has not increased 600 times. They may be right and Aurora's figures may be wrong but to prove these figure wrong, it is necessary for media groups to share details of their accounts so that media workers get information about the revenue and expenditure of their organisations."

Replying to the question, Chaudhry said, "I tried to bring a law in this regard (workers' salaries) but I faced protest ... It is difficult to fight mafias."

He added that he had asked media owners in his tweet to share the details of their accounts so that their employees had knowledge of their organisations' incomes expenditures.