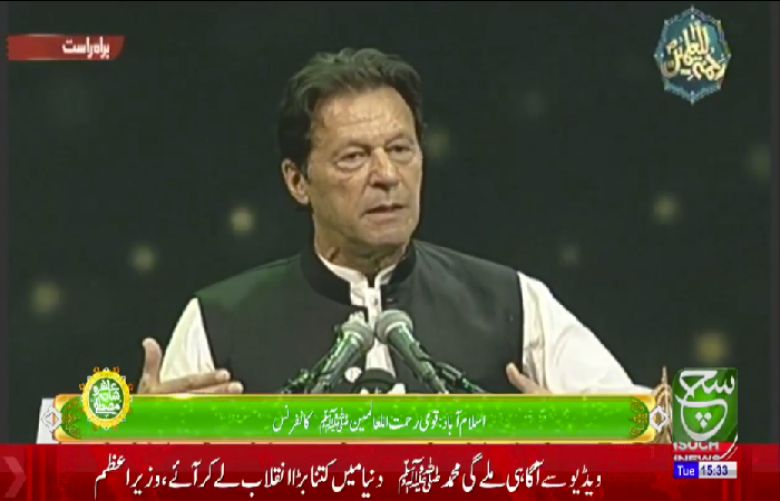 Prime Minister Imran Khan on Tuesday promised to establish an exemplary rule of law in the country and said that everyone, irrespective of their status in society, will be equal before the law.

"We will have to make the powerful abide by the laws of this country, otherwise, the system will never be corrected," the premier said while addressing the Rehmatul-lil-Alameen conference in Islamabad on the occasion of Eid Milad un Nabi, a day of spiritual significance in Islam.

"We cannot win this war unless the rule of law prevails in the country," he said.

The 12th of Rabi ul Awal is being celebrated across the country today (Tuesday) with traditional zeal and fervour. It is the anniversary of the birth of the Holy Prophet Mohammad (PBUH).

At the beginning of the conference, the premier praised the Holy Prophet (PUBH) and said that due to his teachings, Muslims were able to achieve a lot.

"He stressed Muslims to seek knowledge, even if they have to go to China for the purpose. By acquiring knowledge, Muslims became the greatest scientists of the world in the past," the PM said.

The premier added that the Holy Prophet (PBUH) was sent to this world as a blessing to mankind.

"Whoever follows in the footsteps of the Holy Prophet (PUBH) will succeed in life," he said. "Allah has promised that whoever follows the sunnah of his messenger will never fail."

The premier also talked about the prevalent corruption among politicians and said that even those nations that were attacked with atomic bombs survived and rose again but countries where corruption prevails cannot progress.

"You can't destroy a nation's principles through bombing, the premier said, adding that a nation is not poor with resources but it becomes poor without law and justice.

The premier went on to say that in order for democracy to be successful, every individual in a nation has to have high moral standards.

The prime minister then expressed his concern about the youth of the country and said that bringing them towards the path of righteousness is a challenge.

The PM said that parents are unable to take away mobile phones from children by force and cannot block their social media.

"Although there is no compulsion in religion, we can show them the right way. We can, at least, train our children, talk about the bad effects of [western] culture," he said.

PM Imran Khan also talked about growing sexual crimes in the country and said that it has become a "big threat."

He also talked about the Rehmatul-lil-Alameen Authority and said that a scholar will be authorised to guide media organisations regarding the content being aired.