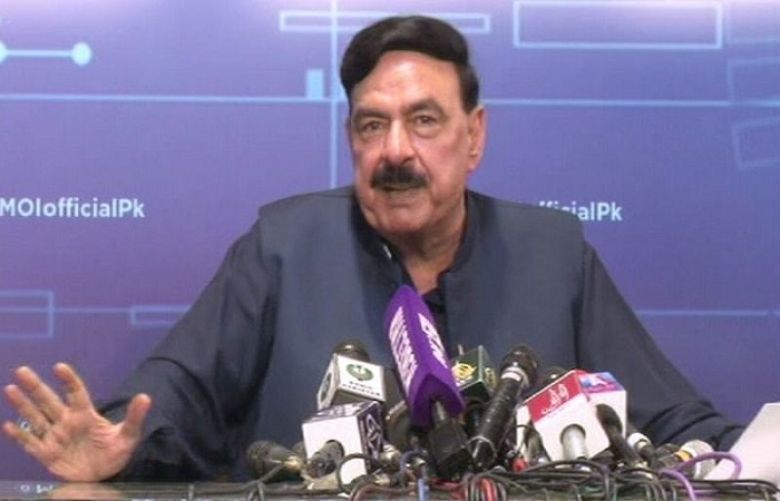 Interior Minister Sheikh Rashid Ahmed expressed on Monday ignorance about the government starting talks with the Tehreek-i-Taliban Pakistan (TTP), just days after Prime Minister Imran Khan confirmed in an interview with Turkish broadcaster TRT World that talks with some factions of the banned outfit were underway.

Replying to a question during a press conference in Islamabad, Ahmed said, "The Ministry of Interior has no role in this [talks with the TTP], and if the Taliban are engaged in any dialogue then it is not in my knowledge."

He added that "nothing is final as to how this will end up".

To another question about whether he wanted talks to be held with the TTP, he replied that decisions on such matters were taking "at the highest level" by the prime minister.

"The Ministry of Interior does not make these decisions," he reiterated.

Acknowledging that army soldiers had been sacrificing lives in the fight against terrorism, he further stated that the prime minister had clarified that talks would be held with only those groups who would lay down their arms and would abide by the law and Constitution of Pakistan.

"Those who are terrorists and have caused harm to the country will not be engaged in dialogue."

Ahmed repeated that this was the prime minister's decision and his ministry was not involved in the matter.

The interior minister's stance on the matter comes amid growing criticism by the opposition over the government deciding to hold talks with the TTP and offer some factions of the banned outfit amnesty.

President Arif Alvi was the first one to hint at the possibility of the government giving amnesty to those members of the TTP who had not remained involved in "criminal activities" and who would lay down their weapons and agree to adhere to the Constitution.

Such an amnesty could be one of the ways to "establish peace", the president had said.

His remarks were followed by Foreign Minister Shah Mahmood Qureshi expressing similar sentiments in an interview on September 15.

He had said the government would be "open to giving" a pardon to members of the TTP if they promised not to get involved in terrorist activities and submit to the Constitution.

"But as long as they do not come and start undertaking terrorist activities [in Pakistan]. That is our concern," the minister had emphasised.

This followed PM Imran saying in the recent interview with the TRT World that "there are different groups which form the TTP and some of them want to talk to our government for peace. So, we are in talks with them. It’s a reconciliation process."

Later, Ahmed, too, had clarified that the amnesty offer was only for the "good Taliban".

“The case of those who were involved in incidents like the APS is different. And the case of those who left the country for different reasons is different,” he had said in reply to a question about the merit and mechanism of talks with the TTP. “We are not surrendering to anyone and this process is at a very early phase. No one needs to jump to conclusions at this stage.”

The move has drawn a strong reaction from the opposition, which had questioned why it had not been taken into confidence on the matter.

After PM Imran's interview, PPP leaders had said the move was akin to "sprinkling salt on the wounds of martyrs' families."

The party had called for the government to clarify in parliament the terms under which the talks were being held.

More recently on Sunday, opposition parties again asked the Pakistan Tehreek-i-Insaf government to take the parliament into confidence over the terms of engagements with the banned terrorist outfit and expressed concern over the government’s act of keeping the talks with the TTP secret.

While speaking to the media on Monday, Ahmed also announced the launch of an online visa service for Afghanistan in three weeks, which would replace the visa-on-arrival system.

He further said 20,000 people from Afghanistan had entered Pakistan since August 15 and 6,000 had left for the former.

The minister added Integrated Border Management Systems had been installed at 16 terminals at the Chaman border and the system would later be installed at five more terminals.