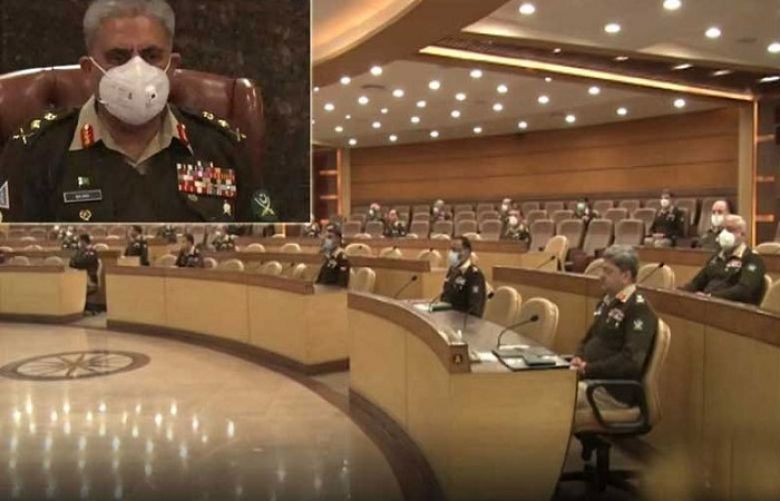 The Chief of Army Staff (COAS) General Qamar Javed Bajwa on Tuesday undertook a comprehensive review of the country's regional and domestic security environment, with special focus on the situation along the borders, internal security, and other professional matters of the Army.

According to a statement issued by the Inter-Services Public Relations (ISPR), the COAS was chairing the 239th Corps Commanders’ Conference held at the General Headquarters in Rawalpindi.

Against the backdrop of the Kashmir Solidarity Day, the forum noted the increasing realisation at international forums about the worsening humanitarian and security crises in Indian Occupied Jammu and Kashmir (IOJ&K).

According to the statement, the forum reaffirmed Pakistan's unwavering support to the resilient Kashmiri people in their struggle for the right to self-determination in accordance with the relevant UNSC resolutions.

Dilating upon the Afghan Peace Process, the participants expressed hope for peaceful and stable Afghanistan for regional peace and stability.

The commanders noted that the enormity of the security challenges warrants a holistic national response, keeping national interest above everything else. Participants underscored the need to ensure continuous operational preparedness to thwart any possible misadventure from adversaries.

The forum also deliberated upon the improved security situation in erstwhile Federally Administered Tribal Areas (FATA) in detail and concluded the requirement for an early implementation of reforms in the newly-merged tribal districts, especially towards enabling the law enforcement agencies' (LEAs) apparatus to achieve sustainable peace in the area.

The forum also expressed satisfaction over countering hostile intelligence agencies’ design to disrupt peace and progress, particularly in Balochistan and Gilgit Baltistan, which lay exposed to the entire world, thus vindicating Pakistan’s stance on the role of hostile agencies in training and funding of terrorists, the statement said.

"Dividends of improved security situation including the return of international cricket in the country is a result of numerous sacrifices rendered and challenges overcome to eliminate extremism and terrorism from Pakistan. We will stay the course, InshaAllah," the COAS concluded.