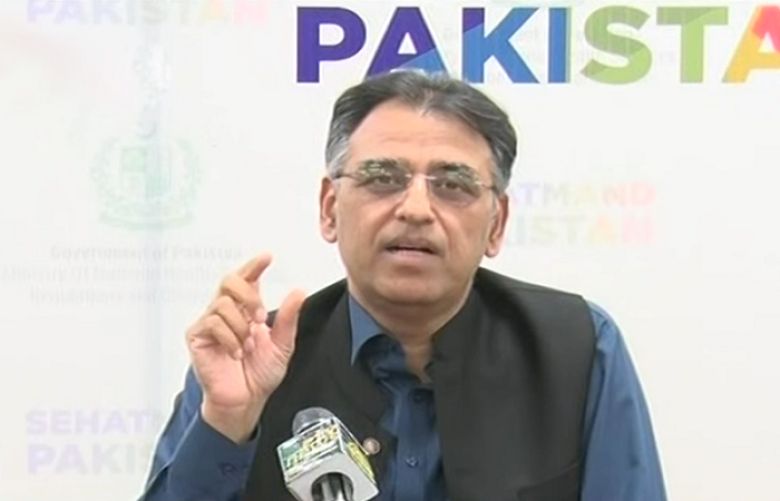 Federal Minister for Planning, Development and Special Initiatives Asad Umar said on Saturday that the federal government would not hold a monopoly on the import of coronavirus vaccines, adding that provinces and the private sector were free to import vaccines subject to approval of the Drug Regulatory Authority of Pakistan (Drap).

Umar — who also serves as chief of the National Command and Operations Centre (NCOC) — made the statement in Geo News show 'Naya Pakistan'. "From day 1, the NCOC has adopted the policy that the federal government shall not have the monopoly to import anti-coronavirus vaccines," he said. "Provinces and private entities including hospitals have been allowed to import the vaccines that are approved by Drap."

He was responding to Sindh Health Minister Dr Azra Pechuho's comments from earlier in the day, where she had urged the federal government to allow the provincial government to procure a vaccine for the novel coronavirus as she criticised the Centre over its 'slow approach' in ordering vaccines. She had further said that the Centre should also play its part in providing vaccines to Sindh but the provincial government must be allowed to procure vaccines for its residents.

Umar said he wanted to clear any misunderstandings, stating that provinces were free as a matter of policy since day one to import vaccines after approval.

The NCOC chief also addressed and gave updates on other aspects of Pakistan's vaccination rollout. He said China's Sinopharm vaccine was also approved by a technical committee and only the matter of its name for local distribution remained, which would be decided by Tuesday. He added that the Chinese government was itself working directly with Pakistan to facilitate doses of Sinopharm and "they will let us know about the first batch of vaccines by Tuesday."

Speaking about China's CanSino vaccine for which phase three clinical trials are currently underway in Pakistan, he said that results of its trial would arrive by the second half of February and "if those are positive then it too will be available in March".

He added that with Pakistan being a signatory to the Covax alliance, vaccines from multiple sources would be procured and made available in the first quarter of the year.

Covax is an alliance that had been set up by Global Alliance for Vaccines and Immunisation (GAVI), Coalition for Epidemic Preparedness Innovations (CEPI) and World Health Organisation in April last year. It has pledged provision of free vaccine for 20pc of the population of around 190 countries, including Pakistan.

Drap earlier on Saturday authorised the AstraZeneca Covid-19 shot for emergency use in Pakistan, making it the first vaccine to get local approval.

Pakistan has also pre-booked more than a million doses of Sinopharm's vaccine from China, Sultan said, adding that the Sinopharm vaccine is awaiting approval from Drap, which has received and reviewed its data. Its efficacy rate was announced at 79.3 per cent by Chinese health authorities.

“We are in the process to obtain Western origin and other vaccines both via bilateral purchase agreements as well as via the Covax facility,” Sultan had said.