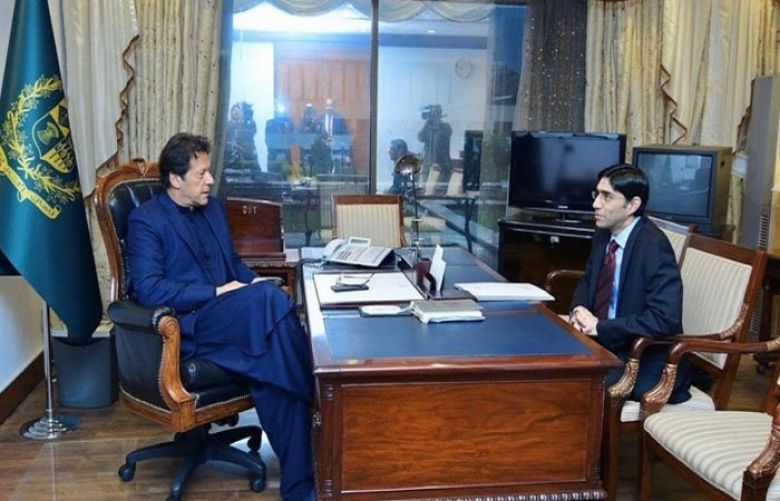 Prime minister's aide Dr Moeed Yusuf on Tuesday said that Pakistan was ready to hold talks with India, provided Kashmir was included as a third party.

In an interview with Indian media outlet The Wire, Yusuf revealed that India had expressed a "desire for conversation" but said that Pakistan's agreement to talks would be conditional. The conditions include the immediate release of occupied Kashmir's political prisoners, lifting of the heavy military siege from the territory, reversal of New Delhi's decision to strip the region of its special status, ending human rights violations in the valley and a stop to India's state-sponsored terrorism against Pakistan.

The interview started with last year's decision by the Indian government to strip occupied Kashmir of its special status, with Thapar asking why Pakistan was "so worked up" on the issue which, the journalist said, was India's "internal" matter.

The SAPM, however, said that the Indian Muslims did not want to be "ruled by India". He quoted Kashmiri leader Farooq Abdullah, who during an interview with Thapar had said that Kashmiris living in the occupied territory "would much rather be ruled by Chinese" than India.

Yusuf further said that the world was "calling India out" over its actions in occupied Kashmir.

"That's the reality. Kashmiris can't bear the thought of being Indian. Kashmiris hate Hindustan," he told Thapar. He further said that while India had "never obeyed" the UN charter and resolutions, it had now "formally stated [that] you're going to violate them".

He regretted that India had chosen to take a "unilateral" decision bypassing the United Nations Security Council resolutions, as well as the bilateral Simla Agreement, signed between New Delhi and Islamabad.

"When you did something unilateral you had to bring in a 180,000 troops, lie to the world that there was a terrorist threat and then Indian government perpetrated terrorism on August 5. And a year later, you had to impose curfew.

"When you say that the wishes of the people don't matter, that's where you go wrong."

"The day India recognises that only the wishes of people of Kashmir matter, this issue can be resolved," Yusuf told Thapar.

The premier's aide explained that while Pakistan had never recognised the now scraped Article 370 of the Indian constitution, adding that Islamabad was "raising the issue [of the Article being repealed] because you (India) have formally gone outside the UN charter and resolutions by making a permanent change to a territory I rightfully claim as mine".

In response to a question, Yusuf said "no decision has been made" regarding granting Gilgit Baltistan a provincial status but added that the matter was the subject of "public debate".

"If it was so confirmed and so done, where is the act?" Yusuf said when asked if Pakistan had granted provincial status to GB and if such a step would be a contradiction to Islamabad's opposition to New Delhi's decision to abrogate Article 370 of the Indian constitution.

"Now you tell me Karan, if a people is not treated well, would they ever want that? I've never heard the Kashmiri Muslims talk about this in the occupied territory," Yusuf said.

He further said that Pakistan's decision would be in line with the resolutions passed by the UNSC.

"If the resolutions bar permanent change of territorial status, there will be no permanent change," Yusuf stated, adding that the matter was being debated in Pakistan since "this is how democratic societies" work.

"Democratic societies, by the way, do not bring in 180,000 troops to change the status of a territory. That's the difference between Pakistan and India right now," Yusuf said, referring to heavy Indian military deployment in occupied Kashmir since August 2019.

He agreed with Thapar that GB was a disputed territory, saying that the region would be included in the plebiscite "the day [it] happens".

He further said that India had left Pakistan with no choice but to speak out on the Kashmir issue on a global stage as the former had repeatedly rejected Islamabad's offers for talks.

On the way forward for Pakistan-India ties, Yusuf said the two countries "need to sit down like adults" and talk about the two fundamental issues affecting their ties — Kashmir and terrorism.

"There has to be an enabling environment to talk. Create that and you will find us willing the next day. Take that one step [and] you will see my prime minister take two," he said, addressing the Indian leadership.

When asked why PM Imran had never raised his voice for the Uighur community in China that was being persecuted by the Chinese government, the SAPM said: "China and Pakistan are friends like no other. We have a completely transparent relationship; virtually everything under the sky, we discuss.

"Uighurs is a non-issue [...] Our delegations have visited, we've seen and we are a 100 per cent satisfied that it's a non-issue. The West can say what it wants. I am telling you as a responsible official: we know everything we need to know about the Uighurs and everything else in China as they do about us."

Thapar quoted an interview PM Imran gave to the Financial Times last year, where the premier had said: "Frankly, I don't know much about" the Uighur issue. Yusuf, however, continued to insist that the matter was a non-issue and said that he had briefed the prime minister about it.

Yusuf also discussed the case of Indian spy Kulbhushan Jadhav, who was convicted by a military court in 2017.

He told Thapar that the Pakistani government had granted India consular access to Jadhav as per the International Court of Justice's verdict but that the Indian government was "dragging its feet" over the matter of appointing a legal representative.

He further said that Pakistan had complied with the ICJ verdict and lamented that court proceedings could not be started because India has yet to appoint a lawyer to get relevant documents. He told Thapar that the Pakistani government was waiting for India to accept Pakistan's offer for a third consular access.

While responding to a question regarding New Delhi's allegations that Pakistan sponsors terrorism in India, Yusuf said that the Indian side had pushed a "one-sided narrative for at least two decades" since 9/11 attacks.

The premier's aide said that in 2019, more than a billion US dollars from the Indian embassy funds had been used for the merger of Tehreek-i-Taliban Pakistan with other terrorist outfits.

"Congratulations to the RAW. They have succeeded in creating an organisation to kill Pakistanis," he said.

He further said that Malik Fareedoun, a mastermind of the Army Public School massacre in Peshawar, was in touch with handlers at the Indian consulate in Afghanistan. The terrorist was also treated at a New Delhi hospital in 2017, Yusuf added. The premier's assistant said that the government had records of phone calls, phone numbers of people who orchestrated the APS attack from a third country.

Yusuf said that Islamabad has "evidence to a T" that India was sponsoring terrorism in Pakistan, adding that the Indian government was "using Afghanistan's" territory in its schemes.

He went on to reveal that Aslam Achoo, a Balochistan Liberation Army terrorist, who was involved in an attack on the Chinese embassy in Karachi, was also "directly working with his RAW handlers" and was also treated at an Indian hospital later.

He said that Pakistan had collected "hard evidence" regarding Indian involvement in terror attacks instead of making them public at a premature stage.

When asked about Indian allegations that Mumbai attacks were sponsored from Pakistan's territory, he said that Islamabad had pursued the case but India refused to grant access to the crime scene or to send its witnesses.

"We have to follow the course of law and India is not cooperating in the evidence it needs to provide. Get the witnesses over, provide the evidence," he said about cases concerning attacks in India.

"Any Pakistani [or] any Indian involved in any violence must face justice. Please play your part and we'll get this done."