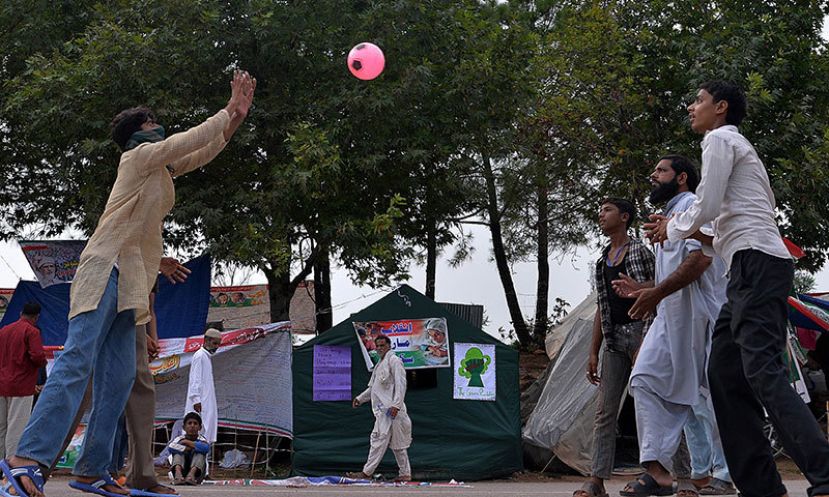 With thousands of police using classrooms as makeshift barracks between nightly deployments to parliament, students in the protest-hit federal capital have been forced to put their academic dreams on hold.

Police have been called in from around the country to handle the protest movement led by PTI Chairman Imran Khan and PAT chief Dr Tahirul Qadri. With no end in sight to a sit-in lasting more than one month, frustration is growing among the 34,000 affected students.

At the Islamabad Model Girls College, one of 27 institutions where officers have taken up residence, tables and chairs have been heaped into piles, damp laundry hangs on staircases and polystyrene food wrappings litter corridors.

Pre-medical student Atiqa Sajjad was told to report for class Monday, with a court-imposed deadline for the 30,000 police to vacate the buildings by September 23 set to expire – only to find burly constables still going about their business.

“They were walking in the corridors half-naked, some were shaving on the lawns and others were going to the shower or coming out of the bathrooms with towels hanging on their shoulders. It looked so weird,” she said.

As of Wednesday the schools remained occupied.

A spokesman of Islamabad Police, however, said earlier today that a private residence has been acquired to accommodate policemen, adding that the contingents would soon move there.

In a statement issued to the media, he said cleaning work was being carried out at the new place and upon its completion, schools would be vacated.

Khan and Qadri have set up camp cities in front of parliament hoping to force the resignation of Prime Minister Nawaz Sharif, whom they accuse of rigging last year's general election.

Their followers clashed with police in late August after they tried to storm the prime minister's residence, leaving three demonstrators dead and hundreds injured on both sides. On September 1, the opposition groups briefly occupied the state broadcaster.

The movement has since lost momentum, but with Sharif's resignation the main obstacle to a settlement, students from age six up to post-graduates are getting desperate for schools to reopen after summer break, which officially ended on August 11.