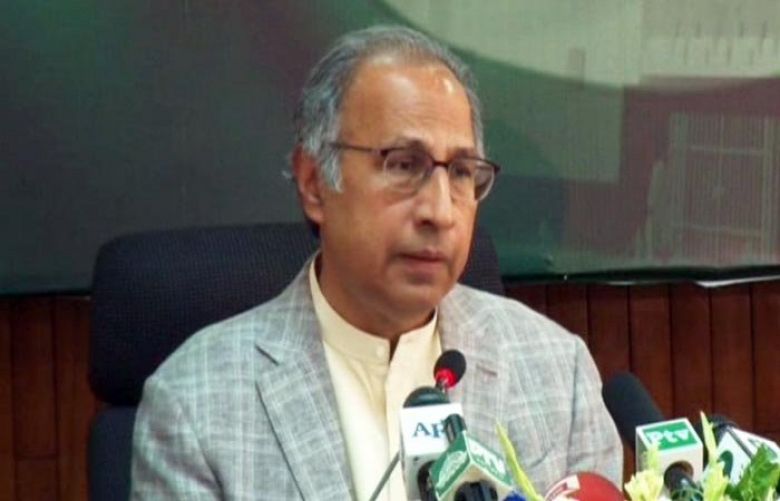 Adviser to the Prime Minister on Finance Dr Hafeez Shaikh on Wednesday insisted that "rich people in other countries pay higher taxes" as compared to the upper class in Pakistan.

Addressing a press conference a day after the government announced the budget, Shaikh said that the average tax rate of Pakistan is 11-12 per cent, which is "one of the lowest in the world and is not acceptable".

"If we have to offend some people for this (increasing tax rate), then we are ready to do it," he declared.

Commenting on the ambitious tax target for fiscal year 2019-20, Shaikh said: "Pakistan's people, especially the rich, will have to be sincere with the country and will have to pay taxes."

The tax target for this year has been set at Rs5,550 billion. Responding to questions regarding the measures taken to ensure that the tax target is achieved, Shaikh said: "This is not an easy target for us. If there are people who think that this target is not achievable, they won't be entirely wrong given FBR's performance in the past. But this is a new regime and we will try [to achieve the target].The stakes for the country are so high that it cannot be business as usual."

"We will have to reduce our expenditures and we have to give this message to the Pakistani public that we (the government) will be at the forefront in reducing our expenses. If we are asking people to sacrifice, we will have to convince them that we are ready to make sacrifices as well.

"So we [adopted] austerity and reduced our expenses notably," he added.

Shaikh revealed that the distinction between tax filers and non-filers will also be eliminated.

"If a person, who has been a non-filer in the past, buys a car or property, he will automatically have to become a filer. If he fails to become a filer within 45 days, he will receive a tax liability within half an hour after the 45-day limit has lapsed," Shaikh warned.

"God willing [these measures] will produce good results and will also satisfy the people who wish for the tax base to be increased so that current tax-payers will not have to bear more burden."

Shaikh further said that while businesses will not have to pay taxes over exported goods, they will be taxed over products they sell in the domestic market.

FBR Chairman Shabbar Zaidi, who was also present, said that the government has "moved from traditional system to sectoral analysis [to figure out] which of the industries or sectors are paying less taxes than they should".

Zaidi admitted that there was a difference between the tax target and the amount of revenue announced in the budget and said that the FBR is identifying sectors that are paying less taxes than they should "without increasing inflation". He added that high-income people will also be included in the tax base in order to remove the discrimination between the rich and poor.

Justifying the increase in taxes, Shaikh said that the country required money to pay the interest on loans borrowed by past governments.

"We didn't borrow [those loans] but we have to pay them back because Pakistan cannot default."

He said that the government has nearly doubled the amount of money allocated to the social safety net — that would include health and nutrition cards — by increasing it from Rs100bn to Rs191bn. The government has also proposed a subsidy for people who consume less than 300 units of electricity in order to "protect them in case of an increase in oil prices in the international market".

"We don't want the vulnerable class of our society to feel like we have forgotten them," Shaikh said.

"Development budget leads to job creation, building of infrastructure and development of different areas. Last year, around Rs550bn were spent in this regard. This year we have allocated Rs950bn."