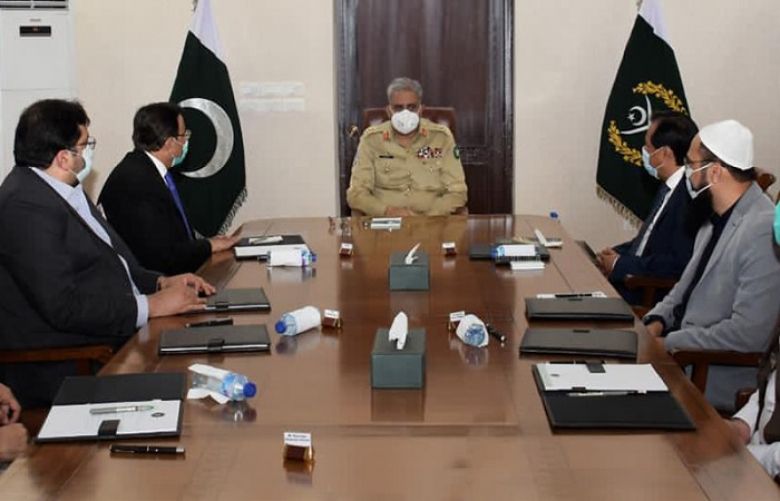 Chief of Army Staff Gen Qamar Javed Bajwa on Wednesday assured the business community of the army’s “complete support” for the economic uplift of the country.

He made this assurance during a meeting with businessmen who called on him at the General Headquarters today, according to a statement by the military’s media affairs wing.

A delegation of the Federation of Pakistan Chambers of Commerce & Industry (FPCCI) and the army chief discussed the “evolving regional economic environment” as well as the FPCCI’s role in the development of commercial and industrial hubs in Pakistan, the Inter-Services Public Relations (ISPR) said.

During the meeting, Gen Bajwa appreciated the role of the business community in the economic uplift of the country and affirmed all-out support of the army in this regard.

The delegation, meanwhile, acknowledged the Pakistan Army’s role and sacrifices in the provision of a "secure enabling environment" for economic prosperity in the country, according to the ISPR.

In September last year, a delegation of top businessmen of Karachi had met the army chief at the Corps Headquarters in Karachi and took up various issues including the Gas Infrastructure Development Cess (GIDC), high cost of land in Karachi, problems in exports and production activities, as well as lack of industrialisation.

Gen Bajwa had assured full support to industrialists and businessmen in resolving various issues besides urging them to set up more industries and enhance exports.

The COAS was of the view that there should be a level playing field for all the stakeholders of trade and industries to work smoothly.