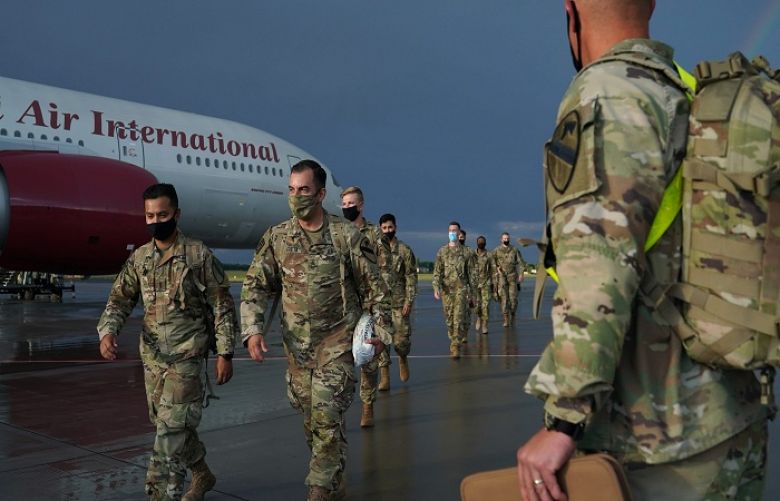 File Photo US to withdraw almost 12,000 troops as 'Germany not paying the bills'

Washington has said it was withdrawing 11,900 American soldiers from Germany in a move which President Trump described specifically to punish Germany for “not paying the bills” for the defence of Europe.

The Pentagon on Wednesday called the move to withdraw the troops "strategic" repositioning, but Trump said was to punish Berlin for its weak defense spending.

US Defense Secretary Mark Esper said that the Pentagon will be sending home about 6,400 of its military personnel in Germany, and move nearly 5,600 to other NATO countries, including Italy and Belgium.

Some could also be relocated to Poland and the Baltic countries if Washington can reach agreements with them, he said.

The move, which will cost the US government several billion dollars, will cut the presence of US military personnel in Germany to around 24,000.

Esper stressed that the action is part of his broader plan to reposition US military forces globally to better address the key threats from Russia and China.

"The repositioning of our forces in Europe constitutes a major strategic and positive shift," Esper said.

"These changes will unquestionably achieve the core principles of enhancing US and NATO deterrence of Russia; strengthening NATO; reassuring allies; and, improving US strategic flexibility," he said.

But at the White House, Trump told reporters that Germany has not paid its fair share for the defense of Europe.

"We don't want to be the suckers anymore.... We're protecting Germany, so we're reducing the force because they´re not paying the bills," said the US leader.

Belgium and Italy to benefit

In moves that could begin within weeks, some US command operations currently in Germany will be moved to Belgium and Italy.

The Pentagon also will move an F-16 fighter squadron from Germany to Italy, to help protect NATO's southeastern flank near the Black Sea.

The city of Stuttgart will lose the US European Command headquarters and Special Operations Command Europe to Belgium.

Some Stryker armored assets will be rotated in southeastern Europe, while another command unit and US troops could be rotated into Poland, if Warsaw signs a cooperation agreement crafted by Trump and Polish President Andrzej Duda in June.

Meanwhile, the planned relocation of 2,500 US air force personnel from Britain to Germany has been cancelled.