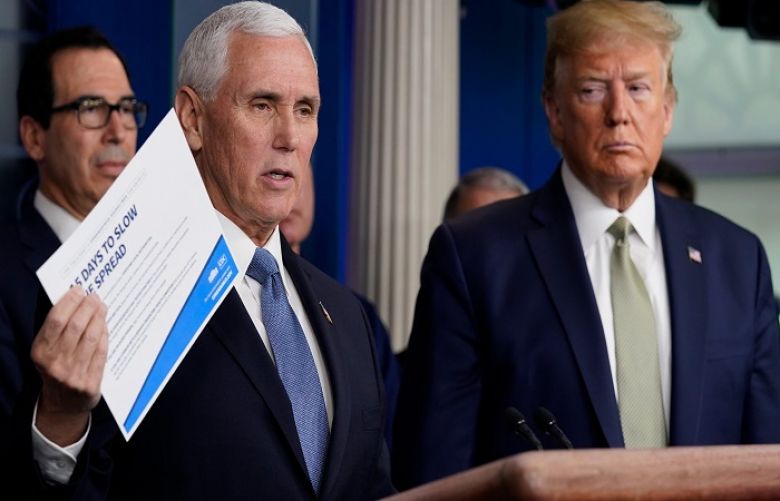 "‪This evening we were notified that a member of the Office of the Vice President tested positive for the Coronavirus. Neither President Trump nor Vice President Pence had close contact with the individual," said Katie Miller.

"Further contact tracing is being conducted in accordance with CDC guidelines."

Pence has been the Trump administration's point person on coordinating the government's response to the coronavirus pandemic.

While the staffer is the closest confirmed case to Pence that is publicly known, it isn't his first potential brush with the virus.

At least two people tested positive for the coronavirus after attending the American Israel Public Affairs Committee's Policy Conference in Washington, which was attended by Pence as well as several lawmakers and aides.

Both Pence and President Donald Trump attended the Conservative Political Action Conference last month, where a high-profile attendee also tested positive for coronavirus. Interactions with that attendee sent multiple Republican lawmakers into self-quarantine in the weeks following the conference.

There is no indication that either Trump or Pence "met with or were in close proximity to the attendee" after attending the conference, White House press secretary Stephanie Grisham said in a statement earlier this month.

As of Monday, Pence had not been tested for the virus.

As the head of the coronavirus task force, the vice president has maintained fairly smooth relationships with the Democratic governors of states hit hard by the virus and projected an image of calm and organization in his near-daily appearances at the White House briefing room lectern to update the nation on the task force's efforts.

Pence's task force still faces serious obstacles. The federal government still does not have a handle on the scale of the pandemic in the US, due to early missteps and insufficient testing. Hospitals are beginning to express serious concerns about shortages of crucial medical equipment, from protective gear to ventilators.

Recent cases on Capitol Hill have added to fears of community spread of coronavirus among Washington politicians.