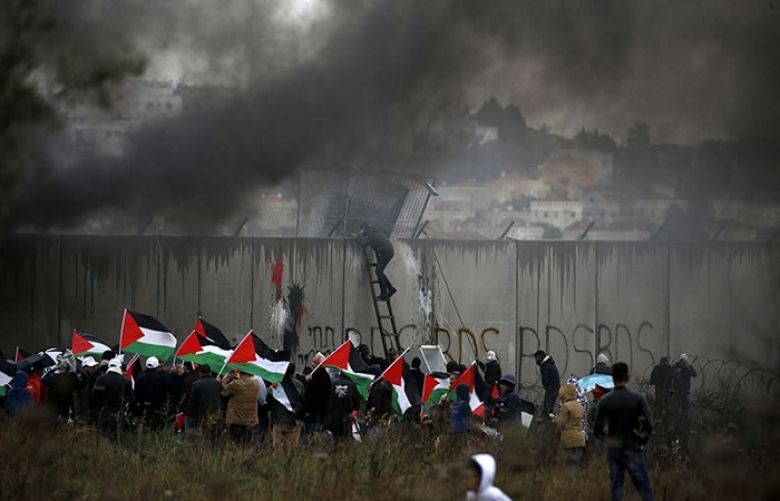 The Palestinians on Friday rejected United States' allegations of "incitement" after a day of clashes and attacks in which three Palestinians, including a member of the security forces, were killed, while a dozen Israeli soldiers were injured.

They linked the violence to US President Donald Trump's Mideast plan, which heavily favours Israel on all the most contentious issues of the conflict and would allow it to annex large parts of the occupied West Bank.

Israeli Prime Minister Benjamin Netanyahu has eagerly embraced the plan. The Palestinians have adamantly rejected it, but Abbas has not called for violence.

"Those who introduce plans for annexation and apartheid and the legalisation of occupation and settlements are the ones who bear full responsibility for deepening the cycle of violence and extremism," senior Palestinian official Saeb Erekat said in a statement.

He was responding to remarks delivered the day before by Jared Kushner, Trump's son-in-law and the architect of the Mideast blueprint, who had blamed Palestinian President Mahmoud Abbas for the latest violence.

"Don't call for days of rage and encourage [your] people to pursue violence if they're not getting what they want," Kushner said on Thursday after briefing the United Nations Security Council on the plan.

The president's son-in-law claimed that Abbas was surprised with how good the plan was for the Palestinian people, but he locked himself into a position by rejecting it before it came out.

Erekat said Abbas will soon bring his own plan to the Security Council, one that he said is rooted in international law and based on a two-state solution along the 1967 lines.

The Palestinians want an independent state in the West Bank, East Jerusalem and the Gaza Strip — territories seized by Israel in the 1967 war. They view Israel's settlements in the West Bank and East Jerusalem, which are home to some 700,000 people, as a major obstacle to peace. Most of the international community views the settlements as illegal.

The Trump plan would allow Israel to annex all its settlements as well as the strategic Jordan Valley. It would give the Palestinians limited autonomy in several chunks of territory with a capital on the outskirts of Jerusalem, but only if they meet nearly impossible conditions.

Palestinian security forces work with Israel to combat militant groups in the parts of the West Bank where Israel allows them to operate. Abbas has threatened to cut off security coordination in response to the Trump plan, but is not believed to have done so.

One of the three Palestinians killed on Thursday was Tariq Badwan, a member of the security forces who was standing at the entrance of a police station in the West Bank town of Jenin when he was shot by Israeli forces.

Israeli troops had clashed with Palestinians while demolishing the home of an alleged militant, and another Palestinian, 19-year-old Yazan Abu Tabekh, was also killed. The policeman did not appear to have been involved in the clashes, and several members of the security forces marched in a funeral procession for him on Friday.

The Palestinians linked the violence to US President Donald Trump's Mideast "peace plan", which heavily favours Israel on all the most contentious issues of the conflict and would allow it to annex large parts of the occupied West Bank.

An Arab citizen of Israel was shot dead on Thursday in the Old City, part of annexed east Jerusalem, after opening fire on Israeli police, lightly wounding one of them. Hours earlier, 12 Israeli soldiers were wounded when a car rammed into them elsewhere in the city. The driver, a Palestinian from east Jerusalem, was later apprehended in the West Bank.

Another Israeli soldier was lightly wounded in a shooting in the West Bank. The gunman fled the scene after trading fire with Israeli troops.

Abbas' forces are not allowed to operate in Jerusalem or near the West Bank settlements. He has no control over the Gaza Strip, where the Hamas group seized power from his forces in 2007. His policy of cooperating with Israel on security is deeply unpopular among Palestinians, many of whom see it as serving the Israeli occupation.

Palestinian militants in Gaza have fired a steady stream of rockets, mortar rounds and explosive balloons at Israel since the Trump deal was announced. Israel has responded with waves of airstrikes, but there have been no casualties from the exchanges of fire.