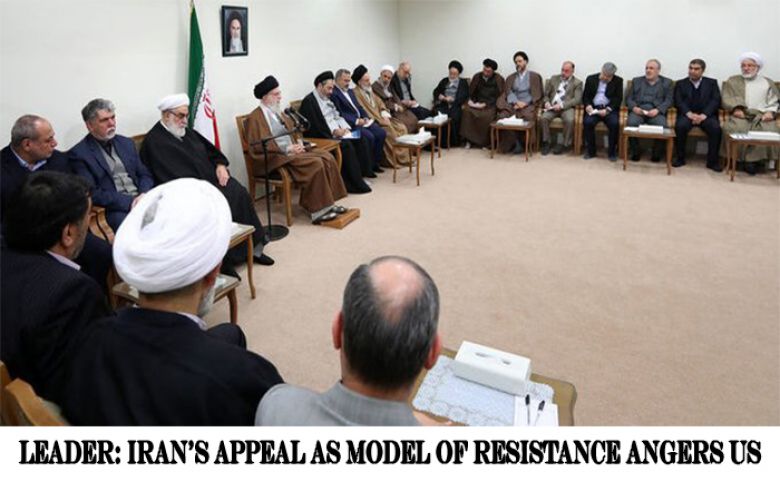 Leader of the Islamic Revolution Ayatollah Seyed Ali Khamenei highlighted the importance of the Hajj pilgrimage and urged Iranian officials to use it as an opportunity to promote the Islamic Republic’s “religious democracy” in the world.

Ayatollah Khamenei told a group of Hajj officials in Tehran that the Iranian nation’s independence, resistance and refusal to submit to bullying angers the United States.

Ayatollah Khamenei said the model of “religious democracy” being practiced in Iran is unknown to the world, adding the Hajj is an opportunity to promote it and explain the reasons behind the US enmity with Iran, while “millions of propaganda instruments are operating against the Islamic Republic”.

“The reason Americans are angry with the Iranian nation is the appeal which arises from the image of resistance in an independent system standing up against a highway bully,” the Leader said.

Tensions between Iran and the United States have risen to new highs following the Unites States’ assassination of top Iranian military General Qassem Soleimani in Iraq and the Islamic Republic’s response to the terrorist move with a volley of ballistic missiles pounding two US bases.

US Secretary of State Mike Pompeo released a video after the attack, in which he said Washington wanted “Iran to simply behave like a normal nation.”

Ayatollah Khamenei said the “aim of the Americans in saying that Iran should behave like a normal nation is that the Islamic Republic drop its new message for the world, that is combining popular opinion with Islamic thought and religious principles in the formation and administration of society.”

“Introducing the political foundations of the Islamic Republic's system and explaining its new message to the world is another important and necessary task in the Hajj,” the Leader added.

Ayatollah Khamenei described the Hajj as a political, ideological and social movement, saying many countries are unaware of its significance and function.

The late father of the Islamic Revolution Imam Khomeini “taught us that the Hajj is a serious and international mobilization point, and bears many benefits for the Islamic Ummah,” the Leader said.

Ayatollah Khamenei also touched on immense efforts made by the global powers to prevent the formation of a united Islamic society.