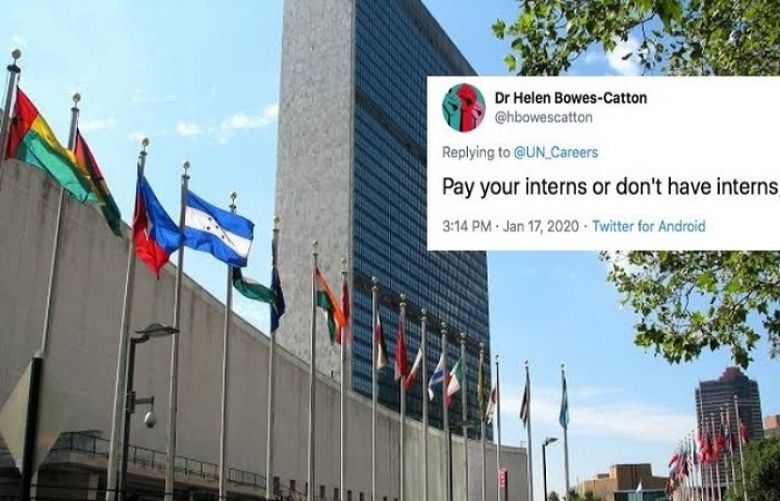 For a young adult at the beginning of her/his career, working with a prestigious body like the United Nations (UN) would be a dream come true.

And every year, the UN plays host to thousands of interns around the world. But how is a person supposed to survive for two, three, even six months without any pay? Unpaid internships are exclusionary and classist and it is especially shocking when this kind of lack of diversity exists in an institution that is supposed to champion representation and social equality.

Funnily enough, Article 23 of the organisation’s Universal Declaration of Human Rights is literally "Everyone who works has the right to just and favourable remuneration ensuring for himself and his family an existence worthy of human dignity".

So when the organisation posted about yet another unpaid internship (a full-time gig that could go on for three months and requires one to be enrolled in a Master's program no less) on their Twitter account, people were quick to point out the hypocrisy:

That awkward moment when the UN harps on about labour exploitation and then refuses to pay its interns...

Wait so you want a graduate to join your internship programme for them to work 35 HOURS per week for THREE MONTHS UNPAID?!? I’m sorry but I’m laughing at how the United Nations that preaches about human rights when you’re exploiting students ?!? https://t.co/w2BC2aaglL

a MAJOR issue that I'm having in my summer internship search right now is that while I would love to work for an organization like the UN, I (as well as most students) cannot afford to work full-time this summer without pay.

let me see if i understand your ad: graduate joins your internship programme works fulltime = 35 HOURS per week for THREE MONTHS UNPAID?!?
I’m pretty sure that exploiting people is against your mandate as thee United Nations?!? or is exploiting students an exception to the rule? pic.twitter.com/JeYGh8F3i7

The UN, which has its headquarters in New York, doesn't seem to care about how someone will survive without remuneration in one of the most expensive cities in the world

I looked into UN internships a few months ago and was shook when i saw they were unpaid. I don’t know anyone that can fully support themselves with no income in NYC for a whole summer. No wonder its so easy for wealthy people to build political family dynasties. it’s ridiculous. https://t.co/vurx16Ql0V

Got an unpaid UN internship in New York but I had to turn it down because I could only afford £1200/month which is expensive for me but barely nothing in New York. You should consider paying your intern! https://t.co/lKdLYR0gsz