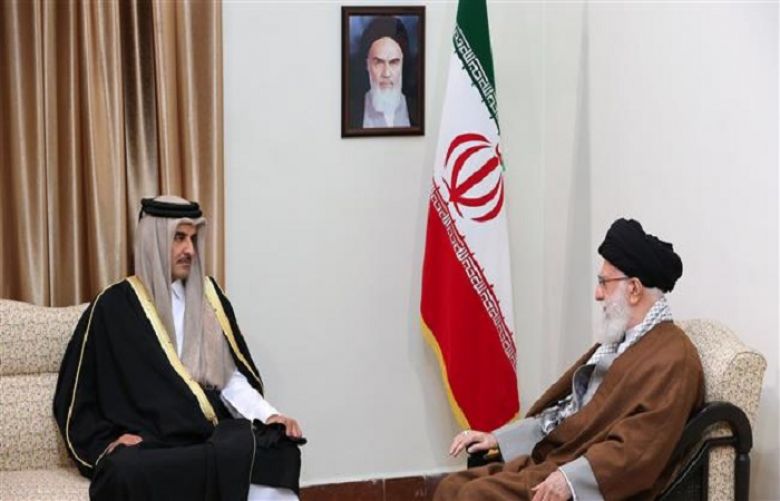 Leader of the Islamic Revolution Ayatollah Seyyed Ali Khamenei says ‘corrupt actions’ taken by the United States and its allies are the main cause of the current situation in the region, urging regional countries to boost cooperation to undo such actions.

The Leader made the remarks in a meeting with visiting Qatari Emir Sheikh Tamim bin Hamad Al-Thani in Tehran on Sunday.

Describing the current conditions in the region as unfavorable, Ayatollah Khamenei said, “The reason behind this situation in corrupt actions taken by American and its allies and the only way to counter it is to rely on inter-regional cooperation.”

Highlighting Iran's advances in various fields of science and technology, knowledge-based activities as well as such utilities as water and power supply, Iran’s president said Tehran was ready to transfer its experiences in these fields to the friendly and brotherly country of Qatar.

In another part of his remarks, the Leader pointed to good political ties between Iran and Qatar, saying, "The two countries' economic relations are not on the same level as political relations and Iran-Qatar cooperation should further improve in common fields."

"The Islamic Republic of Iran has repeatedly announced and Mr. President [Hassan Rouhani] has also explicitly stated that Iran is ready for closer cooperation with regional countries," Ayatollah Khamenei noted.

The Leader stated, "Of course, some parties who have come to this region from across the world are not interested in the expansion of cooperation among regional countries, but this issue has nothing to do with them and regional countries and nations do not accept such bullying and interference anymore."

During the meeting, which was also attended by the Iranian president, the Qatari Emir pointed to the difficult situation in the region and said he completely agrees with Ayatollah Khamenei's remarks about the necessity for enhanced regional cooperation.

Referring to his talks with President Rouhani, he noted that the two sides agreed that Iran-Qatar Joint Commission session must be held within three months and expressed hope the two countries would increase the level of economic ties to the same level of political relations.

The Qatari Emir concluded his remarks by hailing Iran's support for his country, particularly at the time of Saudi-led sanctions against Doha.

Speaking at a meeting with President Rouhani in Tehran earlier in the day, Al Thani said his country attaches importance to cooperation with Iran as an influential player in the region, pointing out that any security coordination among regional countries will be of no avail in the absence of the Islamic Republic.

Qatar believes heightened tension in the region is not beneficial to any country, the Emir said, highlighting the fact that the Islamic Republic has always pursued a wise and prudent stance on regional developments.