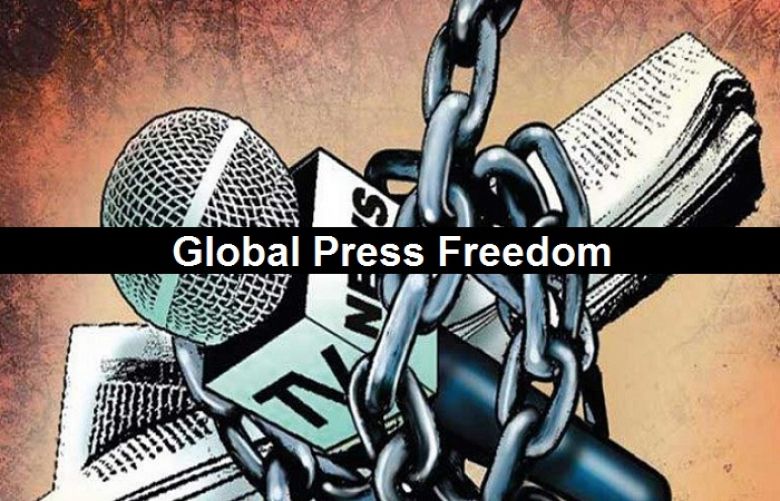 File Photo Global protests and strikes against freedom of press got deepened in the year 2019.

The Vienna-based IPI’s global coverage of media freedom this year showed a rise in the abuse of new and existing laws to threaten, harass and jail journalists, as well as the increasing use of populist rhetoric designed to undermine journalism and discredit independent journalists.

“2019 has seen a clear drop in the number of journalists killed to the lowest level in 20 years, even as impunity remains a major challenge,” IPI Executive Director Barbara Trionfi said.

“We certainly welcome this development. However, we fear it may be a direct consequence of increased authoritarian tendencies in many countries, where alternative means of silencing the press, such as twisting the law to harass and jail critical journalists while smearing independent media, have been adopted to shield political leaders from scrutiny and criticism.”

Police raids and arrests of journalists became rampant this year, the IPI said.

Across the globe, governments enacted new laws in the name of national security or curbing “fake news” and hate speech, including legislation in Nigeria, Cambodia and Singapore. Others used existing legal instruments to harass media organisations and journalists.

According to the IPI, politicians have also weaponized social media to harass and vilify journalists and media outlets that are critical of them. While US President Donald Trump continued to discredit media by calling them enemies of the people, other populist and authoritarian-minded leaders across the world have adopted similar tactics designed to undermine the media’s watchdog role, it said.

In Pakistan, death threats were made against the editor and CEO of the English-language daily Dawn after ruling party politicians strongly criticized the newspaper on social media for publishing a report relating to the November 29 attack in London, the report added.

While the legal crackdown on the press grew in 2019, there was a sharp, welcome decline in the number of killings of journalists as compared to previous years.

According to IPI’s Death Watch, 47 journalists were killed this year, as compared to 79 in 2018 and 82 in 2017. Of those killed this year, 30 were murdered in targeted attacks in retaliation for their work, frequently in response to reports exposing corruption or activities of crime syndicates. While the drop in killings was welcome, impunity for past murders remains rampant, the IPI noted.