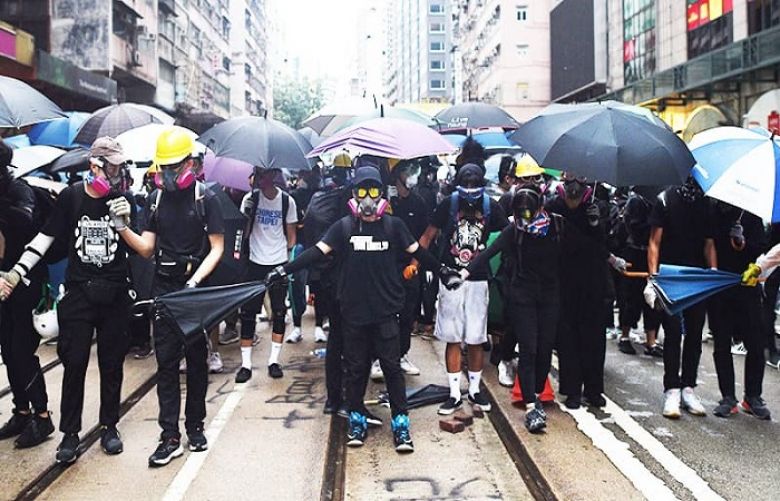 Hong Kong was rocked by fresh violence Sunday as tens of thousands hit the streets to defy a ban on face masks, sparking clashes with police, street fights and vandalism across the strife-torn city.

Large crowds marched through torrential rain in peaceful but unsanctioned rallies on both sides of Victoria Harbour, condemning the government for deploying emergency powers to ban face masks at public gatherings.

But violence erupted as police dispersed crowds with tear gas, and then battled hardcore protesters in multiple locations — plunging the finance hub into chaos once more.

In one incident, a taxi driver was beaten bloody in the district of Sham Shui Po after he drove into a crowd that had surrounded his car.

“Two girls were hit by the car and one girl was trapped between the car and a shop,” a witness, who gave his surname as Wong, told AFP, adding the crowd managed to push the car off the wounded woman.

An AFP photographer saw volunteer medics treating both the driver and the injured women before paramedics and police arrived. Protesters smashed up the taxi.

Earlier, a crowd ransacked nearby government offices, while multiple Chinese banks and subway stations were vandalised across the city.

Pro-democracy lawmakers went to the High Court on Sunday morning seeking an injunction against the ban, arguing the emergency powers bypassed the legislature and contravened the city's mini-constitution.

But a senior judge dismissed their case.

The law allows Lam — who has record-low approval ratings — to make “any regulations whatsoever” during a time of public danger.

She warned she would use the powers to introduce new regulations if the unrest did not abate.

The ban was welcomed by government supporters and Beijing, but opponents and protesters saw it as the start of a slippery slope, tipping the international finance hub into authoritarianism. It has done little to calm tensions or stop crowds coming out so far.

“If Carrie Lam wants to de-escalate the situation, this is not the right way,” a 19-year-old protester, who gave his first name as Corey, told AFP as he marched under a forest of umbrellas on the main island.

Hong Kong has been battered by 18 consecutive weekends of unrest, fanned by widespread public anger over Chinese rule and the police response to protests.

The rallies were ignited by a now-scrapped plan to allow extraditions to the mainland, which fuelled fears of an erosion of liberties promised under the 50-year “one country, two systems” model China agreed to ahead of the 1997 handover by Britain.

After Beijing and local leaders took a hard stance, the demonstrations snowballed into a wider movement calling for more democratic freedoms and police accountability.

Lam has refused major concessions, but struggled to come up with any political solution.

The worst clashes to date erupted on Tuesday as China celebrated 70 years of Communist Party rule, with a teenager shot and wounded by police as he attacked an officer.

A 14-year-old boy was shot and wounded Friday when a plainclothes police officer, who was surrounded by a mob of protesters throwing petrol bombs, fired his sidearm.

Much of subway shuttered

The city's subway system — which carries four million people daily — was shut down entirely Friday night and throughout Saturday, bringing much of the metropolis to a halt.

Major supermarket chains and malls announced they were closing, leading to long lines and panic buying.

On Sunday, more than half the stations remained shuttered, many of them in the heart of the city's main tourist districts.

Some lines were later closed entirely as Sunday's violence worsened. Lam has defended her use of the emergency powers.

“We cannot allow rioters any more to destroy our treasured Hong Kong,” Lam said in a stony-faced video statement on Saturday.

But opposition lawmakers said the use of the law had deepened the crisis.

“I would say this is one of the most important constitutional cases in the history of Hong Kong,” lawmaker Dennis Kwok told reporters before Sunday's ruling.

Protester demands include an independent inquiry into the police, an amnesty for the more than 2,000 people arrested and universal suffrage — all requests rejected by Lam and Beijing.