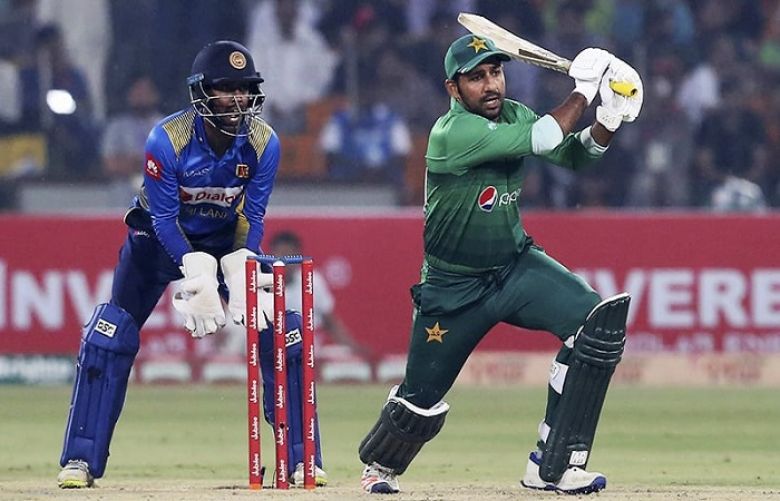 Depleted Sri Lanka pulled off a stunning upset on Saturday, beating the favourites and hosts Pakistan by 64 runs in the first T20I at the Gaddafi Stadium Lahore.

After being put in to bat first, Danushka Gunathilaka and Avishka Fernando opened the innings for Sri Lanka, whereas Imad Wasim and Faheem Ashraf shared the new ball for Pakistan.

The Sri Lankan pair started confidently and did not have to take much risk early on. The loose balls they dispatched with ease and on the few good ones they had luck on their side. They were 50-0 at the end of 5 overs.

The in-form Gunathilaka manhandled the Pakistani bowlers and brought up his 50 in just the 8th over.

Some important folks made it to the stadium but they must have not been impressed by what they saw early on from Pakistani bowlers.

Imad Wasim bowled a tight 9th over, giving away just four runs and that forced Gunathilaka to be a bit more adventurous in the next one bowled by Shadab Khan.

The risk eventually made him vanish as the leggie trapped the impressive leftie in front of the wickets. Gunathilaka contributed 57 off just 38 balls laced with 8 fours and a six.

The loss of Gunathilaka slowed down the Sri Lankan innings and they were dealt a second blow in the 15th over when Shadab's direct hit sent Fernando walking back to the pavilion.

With just 5 overs to go, Sri Lanka were 126-2 and lost the momentum slightly, although could still target 180.

Young pacer Mohammad Hasnain had a difficult first two overs but he came back strong in his third, getting Banuka Rajapaksha out with a fast yorker.

He picked up another in the 19th over, with Dasun Shanaka lofting a slower ball at deep long-on where Umar Akmal and Ahmed Shehzad almost had a collision. Akmal caught it though.

Hasnain removed another the very next ball, which when combined with his first on the last ball of his previous over, made it three on three balls or a hat trick. Few realised it in that moment, however.

Hasnain's wickets and some incredibly tight bowling by Mohammad Amir restricted Sri Lanka to 165-5 in their 20 overs.

Babar Azam and Ahmed Shehzad opened the innings for Pakistan, whereas Kasun Rajitha and Nuwan Pradeep shared the new ball for Sri Lanka.

After a decent first over, Pakistan were dealt twin setbacks as they first lost Azam and then Umar Akmal was out on a first-ball duck.

With the team in trouble, captain Sarfaraz Ahmed walked in to partner Shehzad. But their partnership did not last long as Shehzad played a poor stroke where his feet did not move and he ended up edging one to his stumps.

New man in was Iftikhar Ahmed who impressed mightily in the ODI series but now was his first real assignment in a Pakistan shirt.

The duo plugged the leak of wickets but had to bat on the slower side, which saw the run rate jump up. At the halfway mark, they were 57-3.

Iftikhar's decent 25-run knock came to an end in the 12th over courtesy an unfortunate mix-up. He was ran out as things got messier for the hosts.

After the part he played in Iftikhar's dismissal, there was added responsibility on Sarfaraz. However, he came up short once again, dancing down the track and getting bowled in the 14th over.

Imad Wasim followed him back to the pavilion in the 15th over as wheels completely came off of Pakistan's run chase. Asif Ali and Faheem Ashraf came and went as a heavy defeat became a certainty.

The inevitable happened in the 18th over when Pakistan lost their final two wickets at the score of just 101.