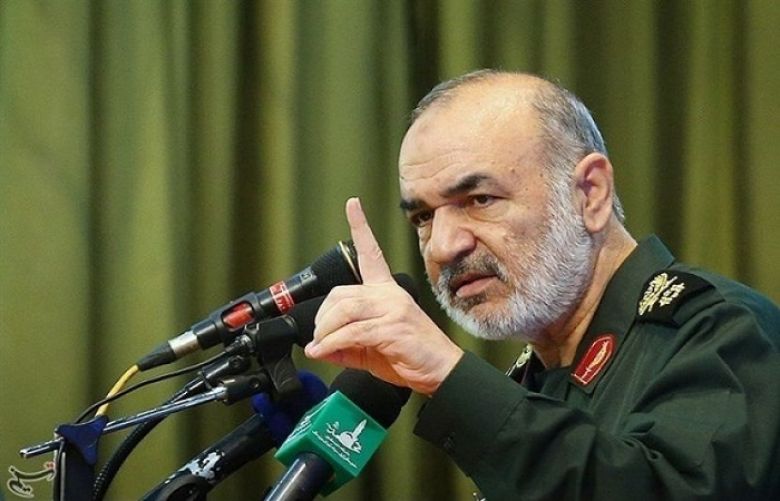 The chief commander of Iran's Islamic Revolution Guards Corps (IRGC) says the Zionist regime is on its path toward collapse because of various weaknesses that are intrinsic to it and external regional forces that seek its annihilation.

Major General Hossein Salami made the remarks in an interview with Press TV on the sidelines of a national gathering of commanders and staff officials of the IRGC on Monday.

“The Zionist regime is moving toward collapse, because from the beginning it lacked the constituent elements of a creditable and official political system,” Salami said, adding that Israel has “neither a land of its own, nor population, nor even an established [political] system [recognized] in the world’s history.”

Salami then noted, “Internal problems and issues that are nagging this regime and its acts of mischief in the region have galvanized the Islamic world against it and caused armed groups and big armies to take position against it. [All these factors,] have naturally put it on the path to collapse.”

The Zionist regime has neither a "strong, deep-rooted and sustainable" economy, nor has its roots deep in any land, nor enjoys a coherent demographic geography, he said.

Salami emphasized that the Tel Aviv regime has many enemies in the region who "all want, in fact, its elimination from the political geography and therefore this will happen naturally."

Last month, Salami highlighted the growing power of the anti-Israel resistance front in the region, including Syria, Lebanon, and Palestine, saying, “The enemy is well aware that any new war may expose the Zionist regime to full-scale threat and irreversible collapse.”

He said that the United States is not interested in waging war on Iran since it knows that any such confrontation would expose the Israeli regime to “full-scale threat.”

Meanwhile, addressing the gathering of the IRGC commanders earlier on Monday, Salami said the concepts of power and resistance differ from each other.

He said, "Many countries may have offensive power and means, but they are vulnerable in the face of any act of aggression, an example of which is the occupying and fake Zionist regime."

The IRGC chief commander emphasized that Iran has "both the offensive power and the power of resistance," saying that the Islamic Republic is currently capable of carrying out an offensive against the enemy at any extent and with any precision and density.

"During the first phase of the Islamic Revolution, we developed the capacity to destroy the fake Zionist regime, but during the second phase, this malicious regime should be eliminated from the world's geography and this important [issue] is not an ideal and a dream anymore, but an achievable goal," Salami pointed out.

Back in February, Leader of the Islamic Revolution Ayatollah Seyyed Ali Khamenei issued a detailed statement dubbed "The Second Phase of Islamic Revolution" on the occasion of the 40th anniversary of the 1979 revolution that toppled the US-backed Pahlavi regime.

In the statement, Ayatollah Khamenei said the Islamic Revolution guaranteed Iran’s security, stability, and territorial integrity, and stressed that Iran must not back down from its national and revolutionary values.

"Among all the nations suffering from oppression, few make an effort to launch a revolution; and among those nations that have risen and launched a revolution, few have been witnessed to have pursued it to the end, or moved beyond merely changing the government and safeguarded their revolutionary values," read the statement.