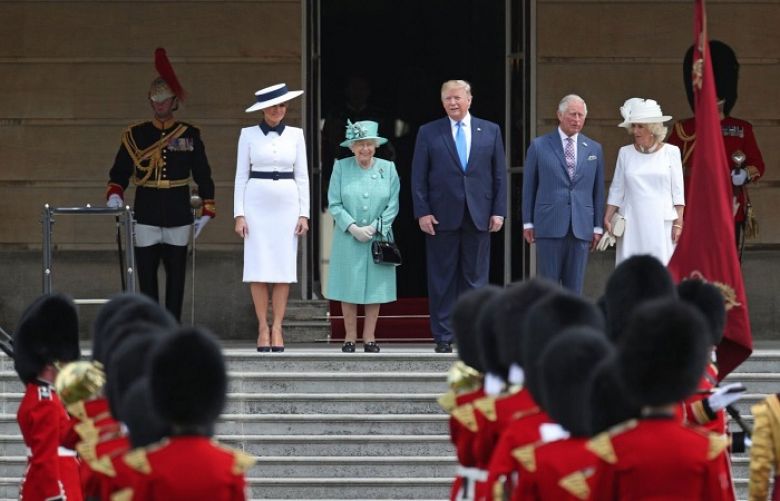 United States President Donald Trump met with Queen Elizabeth II on Monday during two-day visit to Britain that's meant to strengthen ties between the two nations, although the trip was immediately at risk of being overshadowed by Brexit turmoil and a political feud with London's mayor.

Trump and first lady Melania Trump flew to Buckingham Palace in Marine One, landing on a lawn where they were greeted by Prince Charles and his wife Camilla. They received a royal gun salute as they walked to the palace where the queen greeted the president with a smile.

During their visit to Buckingham Palace, Queen Elizabeth II gave President Donald Trump and first lady Melania a look at items in the Royal Collection, one of the largest collections of art and other objects in the world.

Some of the exhibits in a pink gallery are items with a special historical significance to the US.

One is labelled “A Tale of Two Georges: George III and George Washington" and includes a copy of the Declaration of Independence and a letter about the Constitution from Washington to John Jay, a founding father of the US and the nation's first chief justice.

Trump and Melania also paid their respects at the grave of an unknown British warrior who is buried at Westminster Abbey. They were greeted inside the abbey by Prince Andrew and clergy.

They stood silently at the tomb of the British soldier whose body was brought from France to be buried at the abbey in November 1920. The grave contains soil from France and is covered by a slab of black marble.

The president and first lady prayed and bent down to touch a colourful wreath, which had red and white roses and bright blue and pink flowers.

During Trump's trip to Europe, he will also be commemorating the 75th anniversary of D-Day.

Queen Elizabeth II gave the US president the first edition of Winston Churchill's “The Second World War.” The book is Churchill's classic literary account of the war effort that united Britain and the US.

The Queen also gave Trump a three-piece Duofold pen set using an obsidian design that was made exclusively for the queen.

The monarch gave Melania Trump a specially commissioned silver box with a handcrafted enamel lid. The Queen will be hosting the Trumps at a dinner on Monday night at Buckingham Palace.

Later, the president and first lady had afternoon tea with Prince Charles and his wife, Camilla, at their official residence in central London.

The private tea was a rare chance for Charles, the heir to the throne, to talk with Trump in an informal setting without cameras present. It's not known if Charles and Trump discussed climate change, which Charles views as a grave threat and Trump sees as a hoax.

It was a high-profile assignment for Charles, who is taking on more official duties as his mother, 93-year-old Queen Elizabeth II, slightly reduces her schedule.

She has stopped making long foreign trips and has given Charles and her other children and grandchildren a greater role representing her at events.

President Trump arrived on his state visit to Britain in a combative mood, following up his weekend interventions over Brexit with a broadside against London's "loser" mayor.

The president's plane had not even touched down when he tweeted that Sadiq Khan, who has been highly critical of the red-carpet welcome laid on for Trump, had done a "terrible job".

The president called the mayor a "stone cold loser" before adding: "In any event, I look forward to being a great friend to the United Kingdom, and am looking very much forward to my visit."

Khan, shortly after, responded via a video message: "President Trump, if you're watching this […] your values and what you stand for are the complete opposite of London's values and the values in this country."

Trump's visit comes at a time when Britain is in turmoil with Prime Minister Theresa May due to step down within weeks over her handling of her country's exit from the European Union.

Where other leaders may have treaded lightly, Trump weighed in, declaring before he arrived that former foreign minister Boris Johnson would make an "excellent" choice to succeed May.

In a round of British newspaper interviews, he also recommended her successor walk away from talks with Brussels, refuse to pay Britain's agreed divorce bill and leave the EU with no deal.

The much vaunted UK-US "special relationship" was already under strain over different approaches to Iran, China and climate change, as well as Trump's personal politics.

Labour's Khan has led opposition to the three-day visit, condemning Trump's "divisive behaviour" and saying he was "one of the most egregious examples" of a growing global threat from the far-right.

Large protests are planned in London, while opposition politicians are also boycotting the state banquet on Monday night.

But May and Trump are expected to emphasise the wider benefits of the old alliance when they hold talks at Downing Street on Tuesday.

On Wednesday, they will join other world leaders in the English port of Portsmouth to commemorate 75 years since the D-Day landings, which changed the course of World War II.

"Our relationship has underpinned our countries' security and prosperity for many years, and will continue to do so for generations to come," May said ahead of the visit.

May announced her resignation last month after failing to get her Brexit deal through parliament and twice delaying Britain's EU departure.

She will formally quit as her Conservative party's leader on Friday, but will stay on while they find someone to replace her.

Three years after the referendum vote for Brexit, Britain remains divided and anxious about its place in the world.

Trump recommended the new government be bold and make a clean break with the EU if necessary, adding that there was "tremendous potential" for Britain to trade with his country after Brexit.

This message chimes with those of many of the candidates seeking to replace May, including Johnson. However, others warn against severing ties with Britain's closest trading partner.

Trump said he might meet with Johnson and pro-Brexit populist leader Nigel Farage during his UK visit.

"They want to meet. We'll see what happen," he told reporters before he left the United States.

May was the first foreign leader welcomed to the White House after Trump's election victory in November 2016, but their relationship has not always been rosy.

They have clashed in the past over his migration policies, while Britain still backs the Iranian nuclear deal and the Paris climate accord, both of which Trump has abandoned.

Washington has also been putting pressure on Britain to exclude Chinese tech giant Huawei from its 5G network over security concerns, suggesting it might harm intelligence sharing.

Trump's first official visit to Britain last year was overshadowed by criticism of May's approach to Brexit, as well as large demonstrations.

Protesters are planning a big turnout this week and are hoping to once again fly their inflatable balloon showing Trump as a baby over the streets of London.

But the president's itinerary, which also includes a tea with heir to the throne Prince Charles, will keep him away from the public.

He is not expected to meet Prince Harry and his American wife Meghan Markle, after saying her previous criticism of him was "nasty".