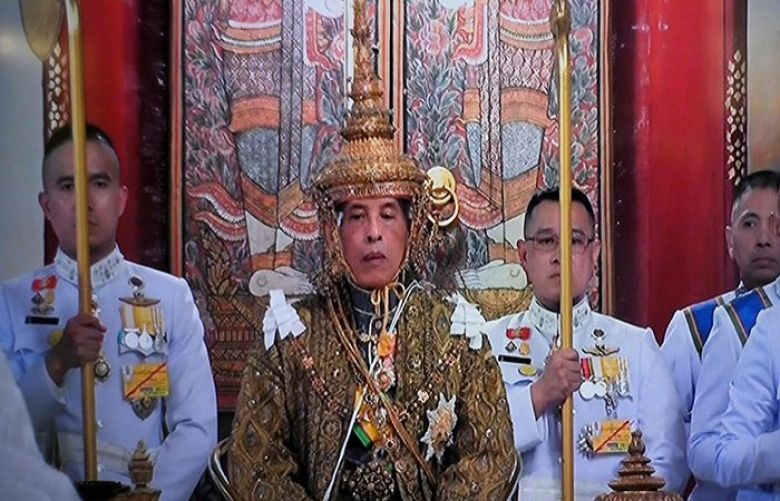 Thai King Maha Vajiralongkorn was crowned Saturday with a golden-tiered headpiece, the highlight of an elaborate three-day coronation ceremony two years after he ascended the throne.

The 66-year-old monarch, known as Rama X and dressed in a bejewelled golden robe, was handed the 7.3-kilogram Crown of Victory, which he placed on his head before issuing his first royal command.

Rama X is widely seen as an adroit player of Thailand's treacherous politics, intervening several times -- including in the March 24 election -- during his short reign.

Those elections are yet to yield a new government, with the kingdom split between pro and anti-junta blocs, the latter crying foul over the vote count so far.

Full results are due to be announced next week with the ruling junta tipped to return as civilian government.

The Thai monarchy takes primacy in the country's power pyramid, but it is buttressed by the army.

Junta leaders past and present were prominent in Saturday's ceremonies.

Earlier, the king arrived at the Grand Palace in a cream Rolls-Royce, his hand raised in a wave but his face characteristically inscrutable.

Their marriage was unexpectedly announced on Wednesday.

On Friday, the king warmly greeted family members in an intimate gathering broadcast on Thai television, including his 14-year-old son from his third marriage -- Prince Dipangkorn -- and his elder sister Ubolratana.

She stunned Thailand in February when her name was forwarded as a candidate for premier by an anti-junta party -- a move swiftly shot down by her brother in a rare royal command.

Thailand's normally hyperactive social media has been subdued in the days leading up to the coronation.

Born on July 28, 1952, the British-schooled Vajiralongkorn is known for his love of cycling and piloting jets, but he spends much of his time overseas -- mainly in Germany -- and remains something of a mystery to many Thais.