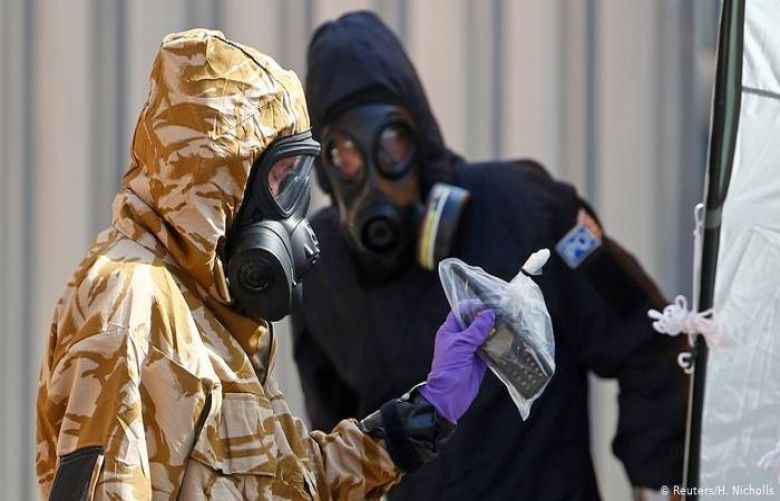 Charlie Rowley's partner Dawn Sturgess was killed after being exposed to the Novichok nerve agent, which was used to attack ex-Russia spy Sergei Skripal and his daughter, Yulia, in Salisbury on March 4, 2018.

Forensic investigators, wearing protective suits, emerge from the rear of John Baker House, after it was confirmed that two people had been poisoned with the nerve agent Novichok
Charlie Rowley, 45, whose partner ,Dawn Sturgess, died last year after being exposure to the nerve agent Novichok, held a 90-minute meeting on Saturday with Ambassador Alexander Yakovenko at Russia's embassy in London. The meeting was arranged by Britain's Sunday Mirror newspaper.

Rowley and Sturgess, a 44-year-old mother of three, fell ill on June 30 last year. British authorities determined that the couple was exposed to Novichok, a military-grade nerve agent developed by the Soviet Union during the last phase of the Cold War. The same substance used in a failed attempt to kill ex-spy Sergei Skripal and his daughter, Yulia, in Salisbury three months earlier.

Sturgess had died after handling a perfume bottle that apparently held the nerve agent that was used against Skripal and Yulia. Rowley had found this bottle in Salisbury and gave it to his girlfriend. He spent 10 days in a coma and has ongoing health problems, including loss of his eyesight.

"I went along to ask them 'why did your country kill my girlfriend?'" Rowley told the tabloid newspaper. "But I didn't really get any answers. I just got Russian propaganda," Rowley added.

"I liked the ambassador, but I thought some of what he said trying to justify Russia not being responsible was ridiculous … The ambassador kept saying the substance wasn't the Novichok they had made because if it was, it would have killed everyone," Rowley said after the meeting.

Britain accused two officers from Russian's military intelligence agency, the GRU, of being responsible for the Novichok poisonings. The two men denied the allegations.

A Russian TV station also reported Rowley's meeting with the Russian envoy, saying the British man was eager for answers that Britain had failed to provide him.