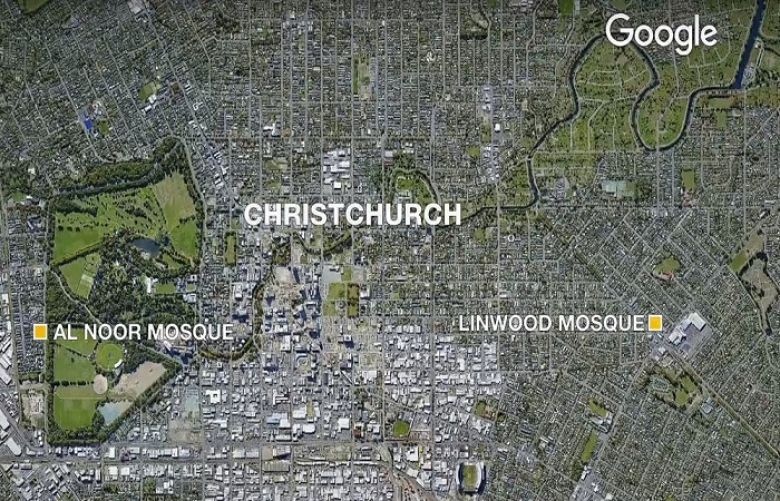 Forty-nine people have been killed and at least 20 others injured in shootings at two mosques in New Zealand city of Christchurch in the worst attack in the Pacific country's history.

"This is, and will be, one of New Zealand's darkest days," an ashen-faced Ardern said.

The mosques on target were the Masjid Al Noor in central Christchurch and another one in suburban Linwood.

Sam Clarke, a reporter with TVNZ, spoke with several people inside the Masjid Al Noor mosque when the shooting began. He told Al Jazeera a man entered with an automatic weapon and began firing.

"A gunman - dressed in black with a helmet carrying a machine gun - came into the back of the mosque and started firing into the people praying there," said Clarke. It was later confirmed that 30 worshippers were killed at the mosque, including women and children.

'Australian' attacker
As many as 41 people died at one mosque, seven at another and one person died in hospital, New Zealand's Police Commissioner Mike Bush told reporters, describing the attack as a "very well-planned event".

Bush said four suspects, including a woman, were apprehended in connection with the attacks. One of the arrested men had been charged with murder.

Authorities have urged people in central Christchurch to stay indoors.

Police have also warned worshippers not to visit mosques "anywhere in New Zealand". A lockdown imposed throughout Christchurch was called off at about 05:00 GMT.

"I won't assume there aren't others but I don't have any information to that effect," Bush told a press conference.

Australian Prime Minister Scott Morrison condemned the attack and said one of the suspects was an Australian national, calling him an "extremist, right-wing, violent terrorist".

He said Australian security authorities were investigating any links between the country and the attack, but declined to provide further details about the Australian gunman.

"It is such a sad and devastating reminder of the evil that can be ever present about us," a visibly emotional Morrison said.

Len Peneha, a witness, said he saw a man dressed in black enter the Masjid Al Noor mosque and then heard dozens of shots, followed by people running from the mosque in terror.

He said he also saw the gunman flee before emergency services arrived.

Peneha - who lives next to the mosque - said he went into the building to try and help. "I saw dead people everywhere."

One man in the mosque, with blood stains all over his clothes, said he hid under a bench as the shooting took place. He said about 50 people were inside the building.

Sam Clarke said some worshippers managed to escape through windows and doors but "many people had been hit, some as young as 16".

About 10 to 15 people were seen outside the mosque, "some alive, some dead", he said.

Farid Ahmed, a wheelchair-bound witness in Christchurch, told Al Jazeera he was at the back of the mosque and heard the shooting for about seven minutes.

"I pushed myself at the back where my car was parked and I was behind the car. And from there I was hearing shooting after shooting," he said.

"After about 10 minutes, I thought the shooter has left. I pushed myself to get inside the mosque and it was unbelievable. I saw in the main room on the right-hand side more than 20 people, some of them dead, some screaming.

"I saw on the floor hundreds of bullet shells. I saw one guy trying to run out and he was shot dead."

Ramzan Ali, a second witness in Christchurch, said he heard one of the women died.

"The mosque has segments, you know, he shot inside, went to another room, shot there. There is the ladies section, he went and shot them. I just heard one of the ladies died, I am hoping that it is not true," he said.

Tahir Nawaz of the International Muslim Association of New Zealand said they have decided to restrict activities at the mosques.

"The whole community is shocked. They would never have expected anything like this [to happen] in this peaceful country. As a result of that [the attack], we are restricting our activities in the mosque and we are trying to keep safety in our area."

Attack video on social media
One of the gunmen shared a live stream of the attack on Facebook and posted content on Instagram. Facebook said it has taken down the video and was removing praise for the gunman.

"Police are aware there is extremely distressing footage relating to the incident in Christchurch circulating online," a police statement said. "We would strongly urge that the link not be shared. We are working to have any footage removed."

There were reports racist literature was left behind at the scene denouncing "invaders".

Commissioner Bush said a number of bombs were detected and neutralised on the attackers' automobiles.

"There were a few reports of IEDs strapped to vehicles which we were able to secure," he said, referring to improved explosive devices.

Asked by reporters whether police considered Friday's carnage a "terrorist attack", Bush said an investigation was under way.

'Anger towards Muslims through media'
Media portrayal of Muslims is fueling anger against the community according to a 2017 academic research in which 16,000 New Zealanders were surveyed.

Speaking to Al Jazeera from Dunedin, the lead researcher, Dr John Shaver of the University of Otago, said, "Highly educated and leftist-oriented people normally tended to have a positive attitude toward not just Muslims but migrant populations in general."

"Our study found that highly educated people, even those on the left, developed anger towards Muslims through the media. The more they watched the news, the more prejudiced they became."

He was, however, careful to add that New Zealand is a multi-cultural society which is accepting of all groups. "There have been only a handful of incidents in which Muslims were harassed or their properties vandalized.

"Things here are not like they are in Australia, the US or the West," he said.

"In the western media, the focus is only on the conflicts in the Middle East," he said.

He went on to say that there is very little coverage in the New Zealand media of the Muslim population in country which is very diverse and has a history of more than 100 years.

"Instead of focusing on the domestic Muslim population, the media focuses on violence and looks at the community from a western media lens," he said.

Close shave for Bangladesh cricketers
ESPN Cricinfo reporter Mohammed Isam said the members of the Bangladesh cricket team, who were to play a Test match in Christchurch scheduled from Saturday, escaped unhurt from the mosque.

Mario Villavarayen, the strength and conditioning coach of the Bangladesh cricket team, was quoted by the New Zealand Herald as saying the team was close to where the shooting occurred, but was safe.

"The players are shaken up but fine," Villavarayen was quoted as saying.

Following the attack, the third Test between New Zealand and Bangladesh was called off.

Perpetrators 'have no place in New Zealand'
Witness Peneha described the scene at Masjid Al Noor as "unbelievable".

"I don't understand how anyone could do this to these people, to anyone. It's ridiculous. I've lived next door to this mosque for about five years and the people are great, they're very friendly. I just don't understand it," he said.

Muslims account for just one percent of New Zealand's population, a 2013 census showed.

"Many of those who would have been affected by this shooting may be migrants to New Zealand," Ardern said.

"They may even be refugees here. They have chosen to make New Zealand their home and it is their home ... they are us. The persons who perpetuated this violence against us ... have no place in New Zealand."

Mass shootings in New Zealand are exceedingly rare. The deadliest in modern history occurred in the small town of Aramoana in 1990, when gunman David Gray shot and killed 13 people following a dispute with a neighbour.