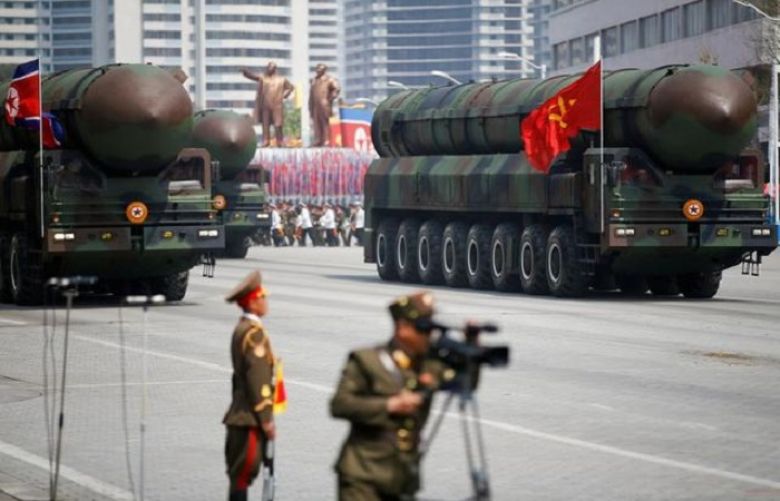 New activities have been detected at a North Korean intercontinental ballistic missiles plant, South Korean media said on Thursday, as U.S. President Donald Trump said he would be very disappointed if Pyongyang rebuilt a rocket site.

Spy chief Suh Hoon told the lawmakers he practically viewed the activity as missile-related, according to the JoongAng Ilbo.

The newspaper also quoted Suh as saying that North Korea continued to operate its uranium enrichment facility at the main Yongbyon nuclear complex after a first summit between Trump and North Korean leader Kim Jong Un in Singapore last June.

The reports came after a second summit between Trump and Kim broke down last week in the Vietnamese capital of Hanoi over differences on how far North Korea was willing to limit its nuclear program and the degree of U.S. willingness to ease sanctions.

The Sanumdong factory produced two Hwasong-15 ICBMs, North Korea’s longest-range missiles which can fly over 13,000 km (8,080 miles). After testing a new Hwasong-15 in late 2017, the country declared the completion of its “state nuclear force,” before pursuing talks with South Korea and the United States last year.

South Korea’s presidential office and defense ministry declined to confirm the reports of activity at Sanumdong, saying they are closely monitoring North Korea’s activities in cooperation with the United States.

There was no immediate response from the U.S. State Department.

North Korea began work to dismantle a missile engine test stand at Sohae last year in line with Kim’ pledge made at his first summit with Trump in June in Singapore.

“I would be very disappointed if that were happening,” Trump told reporters in the Oval Office, when asked if North Korea was breaking a promise.

“It’s too early to see. ... It’s a very early report. We’re the ones that put it out. But I would be very, very disappointed in Chairman Kim, and I don’t think I will be, but we’ll see what happens. We’ll take a look. It’ll ultimately get solved.”

Trump, eager for a big foreign policy win on North Korea that has eluded predecessors for decades, has repeatedly stressed his good relationship with Kim. But the bonhomie has failed so far to bridge the wide gap between the two sides. “We have a very nasty problem there. We have to solve a problem,” Trump said, while adding in apparent reference to Kim: “The relationship is good.”

Imagery from Planet Labs Inc. analyzed by the Center for Nonproliferation Studies at the Middlebury Institute of International Studies in California showed activity at Sohae from Feb. 23 up until Wednesday.

The Washington-based Stimson Center’s 38 North said its latest photos from Wednesday indicated that the rail-mounted transfer building used to move rockets at the site was now complete, cranes had been removed from the launch pad and the transfer building had been moved to the end of the pad.

“But we don’t draw any conclusions from that besides they are restoring the facility. There is no evidence to suggest anything more than that,” Joel Wit of 38 North told Reuters.

A U.S. government source said the work at Sohae likely began before the summit, which was preceded by a series of lower-level talks in February.

Trump’s national security adviser, John Bolton, warned on Tuesday that new sanctions could be introduced if North Korea did not scrap its weapons program.The breakdown of the Hanoi summit and Bolton’s sanctions threat have raised questions about the future of the dialogue the Trump administration has pursued with North Korea.

A 78-minute documentary aired by North Korea’s state television on late Wednesday showed a stone-faced Bolton during an expanded meeting in Hanoi, while Trump and other U.S. participants were all smiles.

The documentary also showed Trump and Kim shaking hands in smiles even after they ended the summit with no deal, saying the two leaders agreed to continue “constructive dialogue.”

Some analysts have interpreted the work at Sohae as an attempt by North Korea to put pressure on Washington to agree to a deal rather than as a definite move to resume tests there.

The U.S. government source, who did not want to be identified, said North Korea’s plan in rebuilding at the site could have been to conspicuously stop again as a demonstration of good faith if a summit agreement was struck, while the work would represent a sign of defiance or resolve if the meeting failed.

Democrat Ed Markey, ranking member of the Senate East Asia Subcommittee, expressed his concern about the reports, saying that Trump had held Sohae up as evidence that his approach to dealing with Kim was working.

Markey said it was imperative to restart working-level talks with North Korea as soon as possible and added that if Pyongyang were to abandon diplomacy the United States should be ready to consider additional ways to apply pressure.

U.S. Secretary of State Mike Pompeo said on Monday he was hopeful he would send a delegation to North Korea in the coming weeks but that he had “no commitment yet.”