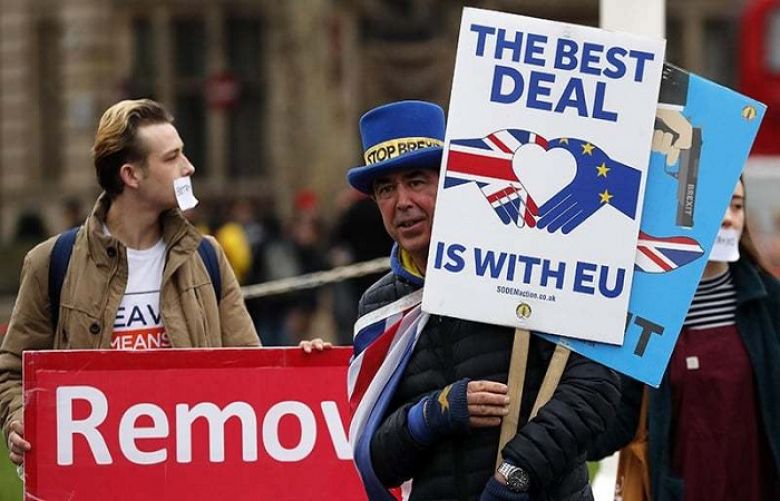 AP Protestors demonstrate in front of the Houses of Parliament in London on Wednesday.

In less than a month the United Kingdom could leave the European Union, but more than a million British nationals will remain there unwilling to let Brexit force them from the lives they've built on the continent.

The UK Parliament's refusal so far to sign off on the withdrawal agreement negotiated with the bloc is raising the prospect of a disorderly divorce that could hit Britons abroad particularly hard, abruptly nixing the benefits they've enjoyed as EU citizens over the past 46 years.

“Many people could be left in limbo,” said Jane Golding, chair of the group British in Europe that's been campaigning for UK citizens' rights in the EU after Brexit.

Just how stranded they are depends upon their personal circumstances and which of the 27 remaining EU countries they live in, Golding said.

Several governments, including France, Spain, Poland and Germany, are preparing legal safety nets for British migrants in the event of a 'no-deal' Brexit.

But British retirees still have no certainty that their pensions will be safe; professional qualifications for doctors, teachers and architects may not be recognised; mutual health insurance agreements could be frozen; and Britons applying for jobs in the EU are being told their applications stand little chance until post-Brexit arrangements are sorted out.

For some of the estimated 1.3 million British citizens on the continent, the realisation is slowly dawning that it's time to act.

“You have people who are already really, really anxious and depressed over all of this,” Golding told The Associated Press. “But you also have a group of people who have been hoping it would all be all right in the end. As 'no deal' becomes more of a possibility there'll be fewer people with their heads in the sand.”

On a wet and windy Monday night this week, hundreds of Britons — some clutching their burgundy-coloured EU passports — streamed into Berlin's city hall hoping for certainty from German and British officials about the bureaucratic requirements for staying after Brexit.

Joshua Spriggs, an actor and voiceover artist who attended with two friends, said many people have been left confused by what they've been told on social media sites such as Reddit and Facebook or by their own embassy.

“It's really hard to get clear information,” Spriggs said after the event. “I've got more questions answered here than I have from the UK.” Authorities in the German capital have been urging Brits to register by March 29, the day Britain is due to leave the EU.

“That's the only way they can be sure not to suffer any legal disadvantages when Brexit happens, whether it's a deal or a no-deal scenario,” said Engelhard Mazanke, who heads the office that processes residency permits for foreigners in Berlin.

So far, only about 7,000 of the 18,000 UK nationals in Berlin have signed up, he said. Those who don't register could end up having to leave the country after a three-month grace period in July. Even those who apply may have to wait until November for a residency permit, leaving them potentially unable to travel outside Germany for several months.

Mazanke said authorities are hoping to avoid this, but much depends on whether London approves the withdrawal agreement it negotiated with Brussels last year. The lack of legal certainty for an estimated 3 million EU citizens living in Britain in case of a 'no-deal' Brexit has many EU governments wary of making formal commitments.

Despite EU frustration over the UK government's stance, there's sympathy toward British migrants on the continent.

Lynn Nothegger, a freelance copywriter who lives in the Bavarian city of Wuerzburg, had the automatic right to live and work anywhere in the European Union when she moved to Germany from Scotland more than 20 years ago.

The narrow decision, in a 2016 referendum, for Britain to leave the 28-nation bloc meant she faced the prospect of being treated like a third-country national after Brexit.

In a move uncharacteristic of German bureaucracy, city officials gave Nothegger their direct number and offered to help wherever possible when she recently applied for German citizenship, a process complicated by the fact that her time in the country was interrupted by lengthy stays abroad.

“They're following the letter of the law, but they're really doing what they can to help,” she told the AP in a telephone interview.

Nothegger said her positive experience may be partly due to the fact that she's a fellow European, speaks fluent German with a local Bavarian dialect and is as perplexed by Brexit as her case workers.

“There's no feeling of schadenfreude or anything,” she said. “It's really just great sympathy for the British people who have been led down this path.”

Mazanke, the immigration official, said Berlin is glad to help anyone who's made their home in the city and contributes to its prosperity and growth.

“That includes a lot of British people,” he said. “We want to help them as best as possible and we're happy about every Briton who stays.”