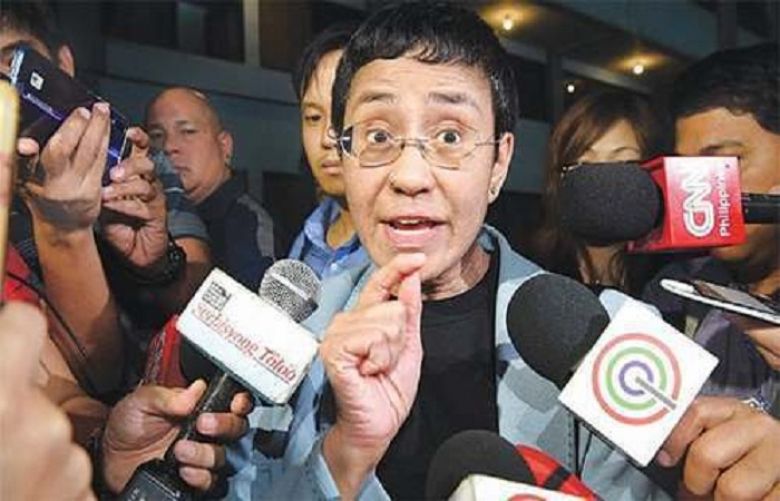 AFP Maria Ressa speaks to the media at the National Bureau of Investigation after her arrest on Wednesday.

Philippine journalist Maria Ressa was freed on bail on Thursday following an arrest that sparked international censure and allegations she is being targeted over her news site's criticism of President Rodrigo Duterte.

Ressa, 55, spent a night in detention after authorities arrested the veteran reporter at her Manila office Wednesday in a sharp upping of government pressure on her and her website Rappler.

The site and Ressa have been hit with tax evasion charges and now a libel case after clashing repeatedly with Duterte over his deadly crackdown on narcotics that has killed thousands.

"The message that the government is sending is very clear ... be silent or you're next," an emotional Ressa told reporters outside a Manila court.

International condemnation from dignitaries, press freedom and human rights groups has poured in since plainclothes agents appeared at Rappler to serve an arrest warrant.

"The arrest of Maria Ressa is an outrage," said Committee to Protect Journalists Board Chair Kathleen Carroll. "She should be freed immediately and the Philippines government needs to cease its multi-pronged attack on Rappler."

Former US Secretary of State Madeleine Albright, tweeted in support: "The arrest of journalist @mariaressa by the Philippine government is outrageous and must be condemned by all democratic nations."

The libel case against Ressa and former Rappler reporter Reynaldo Santos, Jr. stems from a 2012 report written about a businessman's alleged ties to a then-judge on the nation's top court.

While investigators initially dismissed the businessman's 2017 complaint about the article, the case was subsequently forwarded to prosecutors for their consideration.

The legal foundation of the case is a controversial law aiming to crack down on online offences ranging from harassment to child pornography.

Ressa's team has argued the legislation did not take effect until months after the story was published and is not retroactive, however the government has countered that it is fair game because the story was updated in 2014.

"In essence in the contemplation of the law it is a new article because of the modification, republication," Markk Perete, spokesman for Department of Justice prosecutors, told AFP. "That is deemed as a new article."

Rappler concedes the story was updated, but notes it was to fix a typo and no substantive changes were made.

Ressa's lawyer JJ Disini said he will formally ask the court within the week to dismiss the case as the publication and the modification were made more than a year ago.

He argues the maximum period set by law for a legal action to be brought has already lapsed.

"That's disincentive for people to speak out," Disini told reporters. "I think there would be grounds to raise these issues in the Supreme Court."

The businessman who accused Rappler, Wilfredo Keng, on Thursday welcomed the charges as he said the website "destroyed my reputation and endangered my life".

"Maria Ressa's claim that this is an assault on freedom of expression or freedom of the press has no basis," Panelo told Manila's DWFM radio in an interview, adding it was not the president or his allies who brought the libel case.

Duterte has lashed out at other critical media outfits, including the Philippine Daily Inquirer newspaper and broadcaster ABS-CBN.

He had threatened to go after their owners over alleged unpaid taxes or block the network's franchise renewal application.

Some of the drug crackdown's highest-profile detractors have wound up behind bars, including Senator Leila de Lima, who was jailed on drug charges she insists were fabricated to silence her.

Ressa insists the site is not anti-Duterte, saying it is just doing its job to hold the government to account.