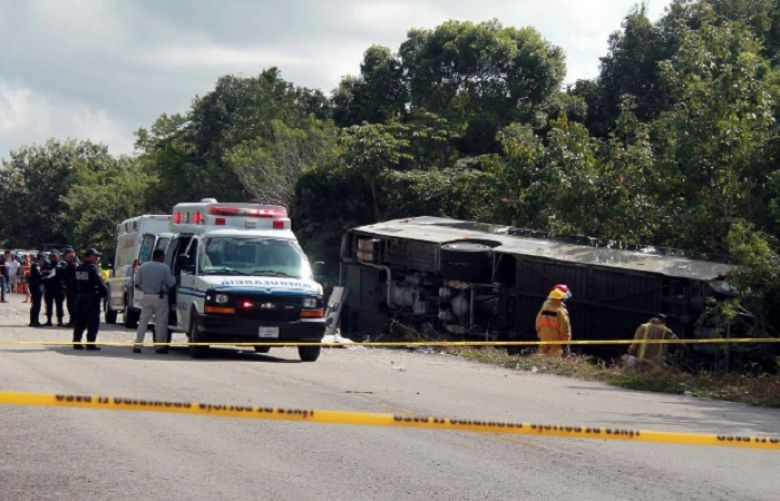 Seven people were killed in New Mexico on Thursday after a Greyhound passenger bus collided head-on with a semi-trailer truck that jumped a highway median strip, state police said.

A tire blew out on the eastbound truck, which jumped the grass median to hit the bus traveling in the opposite direction, police officer Ray Wilson told a news conference.

The bus was carrying 49 passengers, a Greyhound spokeswoman said. It collided with the truck around 12 pm on Interstate 40 near the city of Thoreau, about 100 miles west of Albuquerque, the state police said.

All but six of those on the bus were taken to nearby hospitals, said Wilson, adding that their injuries were minor and treated at the site. Injuries to the driver of the semi-trailer truck were not life threatening, state police said.

Greyhound Lines spokeswoman Crystal Booker said the bus was headed from Albuquerque to Phoenix, but deferred comment on the crash to the state police.

The National Transportation Safety Board said a team of its investigators would arrive on the scene early on Friday.

Investigators were uncertain of the truck’s cargo, but Wilson said, “There are a lot of vegetables” at the crash site. He did not know if speed was a contributing factor to the crash.

Pictures on social media showed a truck on its side with the trailer’s cargo scattered across the highway, and the Greyhound bus upright, but with its front end obliterated.

Gallup Indian Health Services received 37 of the injured, said Jennifer Buschick, a spokeswoman for the Gallup hospital. Six people with injuries too severe to be treated there were stabilised and taken to the University of New Mexico Hospital in Albuquerque.

Three of the six taken to UNMH were in critical condition but the condition of the rest had not been released, said spokeswoman Cindy Foster.