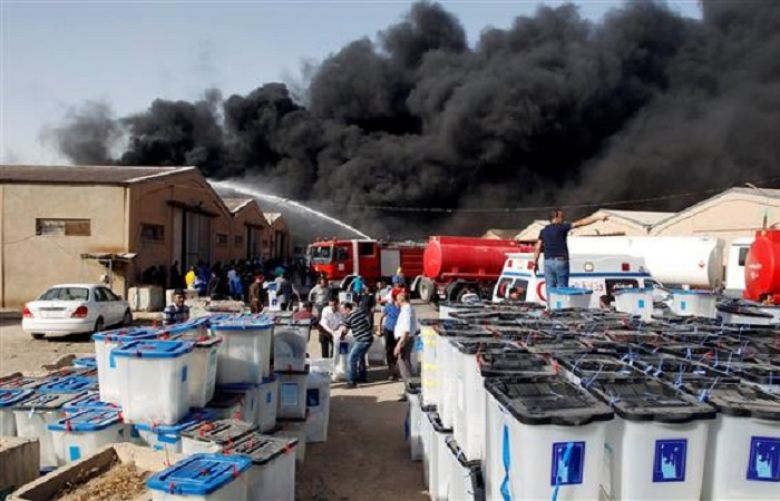 A storage site housing ballot boxes from Iraq’s May parliamentary elections in the capital Baghdad has caught fire ahead of a recount.

The fire broke out in a warehouse located in Russafa, one of the largest voting districts in eastern Baghdad, on Sunday.

Mohamed al-Rabeei, a member of the Baghdad province council, said, “The storage spaces housing all the ballot boxes from Russafa belonging to the election commission are now on fire.”

“Civil defense forces are on the way but I can tell you all the boxes and papers have burned.”

A column of black smoke billowed from the warehouse and could be seen across the capital. Two hours after the blaze erupted, firefighters backed by 10 trucks were still struggling to put out the fire.

Iraqi Interior Ministry spokesman General Saad Maan confirmed that the fire had destroyed some documents and equipment but civil defense forces were trying to prevent it from spreading to ballot boxes.

The site was divided into four warehouses, the spokesman said, and only one, housing electronic equipment and documents, had burned down.

“It is possible there were also some ballot boxes in the warehouse that caught fire, but most of the important boxes are in the three warehouses where the fire has been controlled,” the spokesman said in a video message from the site of the fire.

Earlier on Sunday, the Supreme Judicial Council, Iraq’s highest judicial authority, named judges tasked with taking over the country’s elections commission after allegations of widespread electoral violations in the May elections.

On Wednesday, Iraq's parliament ordered a manual recount at all polling stations.

“The Supreme Judicial Council’s meeting saw the naming of the judges nominated to take over the duties of the board of commissioners of the Independent High Elections Commission,” Judge Abdul-Sattar al-Birqdar said in a statement.

The recount was approved by parliament a day after Prime Minister Haider al-Abadi said there had been serious violations and that most of the blame laid with the elections commission.

The move could undermine nationalist cleric Moqtada al-Sadr, who’s bloc won the largest amount of seats in the elections. One of Sadr’s top aides expressed concerns that some parties were trying to sabotage the cleric’s victory.

The next prime minster will face the huge task of rebuilding a country shattered by the war against the Daesh Takfiri terrorists and the 2003 US invasion.

"The crime of burning ballot box storage warehouses in the Rusafa area is a deliberate act, a planned crime, aimed at hiding instances of fraud and manipulation of votes, lying to the Iraqi people and changing their will and choices," Jabouri said in a statement.

"We call for the election to be repeated," added Jabouri, who lost his seat in the election.

He also called for those responsible to be brought to justice by the security forces, Reuters reported.