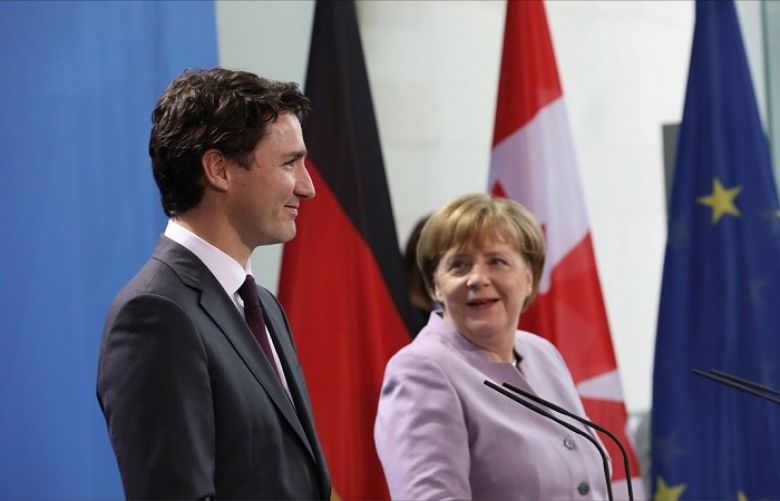 The leaders of Canada and Germany have expressed their shared commitment to NATO as Prime Minister Trudeau and Chancellor Merkel met in Berlin.

The pair have differences on economic issues with Merkel keen on government austerity and Trudeau a believer in investment.

Protests against the CETA trade deal between Canada and the EU continued, those against the deal say it will harm the economy, the environment and democracy itself.

“Canada is proud to call Germany not only a close ally but a true friend.” pic.twitter.com/wAyuCiKS7Q

Supporters say CETA will boost trade between Canada and Europe by 20 per cent.

The pair then laid flowers at the site where a truck was deliberately driven into the Christmas market beside the Kaiser Wilhelm Memorial Church killing 12.

Trudeau travels to Hamburg later for St. Matthew’s Banquet, a gala event with a 700-year history.

He is expected to make a keynote speech warning businesses of the grave danger of the rise in populism and to take steps to counter it.

Canadian Prime Minister Justin Trudeau has hailed the massive trade pact between his country and the European Union, known as CETA, as a blueprint for more ambitious deals in the future.

In the first address by a Canadian leader to the European Parliament, Trudeau said on Thursday that people on both sides of the Atlantic could benefit from the Comprehensive Economic and Trade Agreement (CETA).

He said that CETA would create jobs and boost the middle class both in Canada and in the EU states.

"Trade that is free and fair means that we can make the lives of our citizens more affordable,” said Trudeau.

He said that CETA could be a "blueprint" for future trade deals, adding that it was the outcome of Europe's and Canada's shared history and values.

“If we are successful, CETA will become the blueprint for all ambitious, future trade deals," Trudeau said, adding, “If we are not, this could very well be one of the last.”

CETA, which was approved by the European Parliament on Wednesday, has faced criticism in the EU, with many, especially among the middle class, saying it could ruin many of their jobs as too much power would be given to the multinationals. Free-trade critics hope national and regional parliaments in the EU would block the deal's implementation.

Trudeau also said during his Thursday address that CETA included provisions that would allow governments to protect their citizens and workforce, adding that "trade needs to work for people."

CETA goes into provisional effect as early as April. The pact removes barriers on all traded goods and services, although a few restrictions remain for some products in the sectors of agriculture, transport and public services.

The pact has also its strong supporters, with many hailing it as a hedge against protectionism and stagnation.