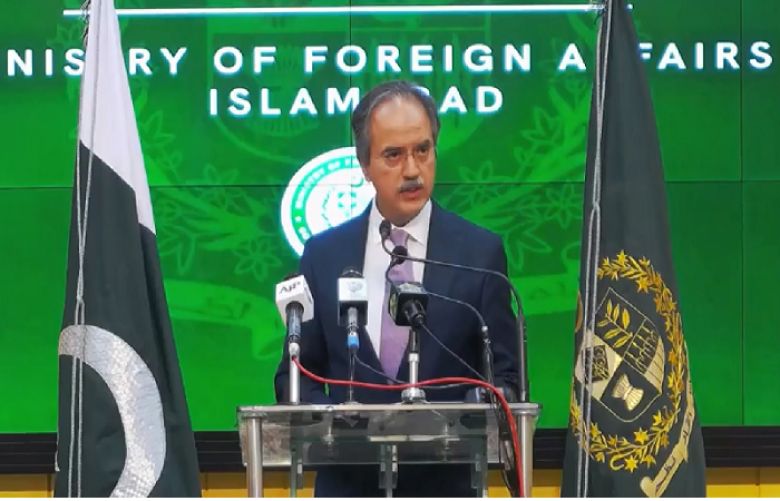 Pakistan has taken a strong exception to India’s external affairs minister S Jaishaknar’s recent statement in which he had urged Washington to ‘reflect on its ties with Islamabad and the price it has paid for a relationship that has served neither side well’.

Responding to media questions about unwarranted remarks by the Indian minister, the foreign office spokesperson on Tuesday said that Pakistan has longstanding and broad-based relationship with the United States, which has been vital in promoting peace, security and stability in the region.

“In recent months Pakistan-US relations have become robust and multidimensional, further deepening people-to-people and bilateral ties. Both countries are constructively engaged to maintain regional peace and security,” he said.

Jaishaknar, while speaking at a community event soon after arriving in Washington DC for the final leg of his US visit on Sunday, had urged Washington to reflect on its ties with Islamabad.

“The US is not fooling anyone by saying that the support for Pakistan Air Force’s F-16s was meant for counterterrorism,” he said, adding that the US relationship with Pakistan, including the military cooperation, was not recent.

“Very honestly, it is a relationship that has ended up serving neither Pakistan well nor serving American interests well. It is really for the US to reflect what the merits of the relationship [are] and what they get by keeping it sort of continuing,” Jaishankar was quoted by the Indian media as saying.

The FO spokesperson in today’s statement strongly urged India to respect basic norms of inter-state relations and refrain from commenting on the bilateral ties between the US and Pakistan. “India also needs serious introspection of its diplomatic conduct.”