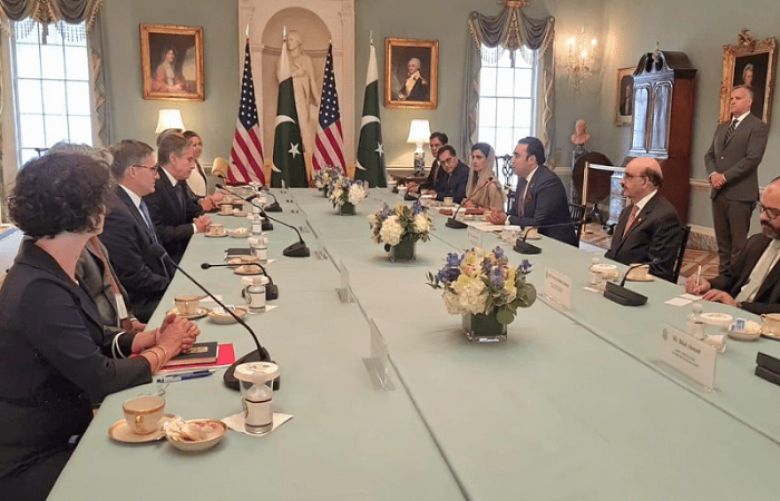 US Secretary of State Antony Blinken on Monday called on Pakistan to seek debt relief from close partner China as floods devastate the country.

Blinken promised strong US support for Pakistan as it dries out from the floods, which have submerged one-third of the country, an area the size of the United Kingdom.

“We send a simple message. We are here for Pakistan, just as we were during past natural disasters, looking ahead to rebuild,” Blinken said after talks in Washington with Foreign Minister Bilawal Bhutto-Zardari.

“I also urged our colleagues to engage China on some of the important issues of debt relief and restructuring so that Pakistan can more quickly recover from the floods,” Blinken said.

China is a key economic and political partner of Pakistan, pushing ahead with the $54 billion economic corridor that will build infrastructure and give Beijing an outlet to the Indian Ocean.

Washington, whose alliance with Islamabad has frayed, has repeatedly charged that China will reap the benefits while Pakistan will face unsustainable debt.

The warnings by the United States — which considers China its pre-eminent global competitor — have repeatedly been brushed aside by Pakistan.

Some 1,600 people — one-third of them children — have died in Pakistan’s floods and more than seven million have been displaced, amid fears that such severe disasters will become more common due to climate change.

The United States has committed $56 million in humanitarian aid and sent 17 planes full of supplies, with promises of long-term support.

Bilawal said that US President Joe Biden, who signed a landmark domestic climate package last month, also needed to look at “climate justice”. “It’s not only important that you ‘build back better’ here,” he said, using Biden’s campaign slogan.

“The opportunity of this crisis in Pakistan is that we must build back better — greener, more climate-resilient — back home as well,” he said.

“I believe that working together we can do this.”

Pakistan, despite being the fifth most populous country, contributes only about 0.8 per cent of greenhouse gas emissions blamed for climate change due to its state of development.

The US relationship with Pakistan sharply deteriorated over the course of the two-decade war in Afghanistan.

“We have had our differences — that’s no secret,” Blinken said.

But he said Pakistan and the United States “have a shared stake in Afghanistan’s future”, including greater freedoms for women and girls, whose rights have again been heavily curtailed by the Taliban.

Prime Minister Shehbaz Sharif’s five-month-old government has faced criticism for restrictions on the media since he replaced Imran Khan.

Blinken also called on Pakistan to pursue a “responsible relationship” with India.

Dialogue has been at a standstill between the historic rivals.

Immediately after meeting Bilawal, Blinken was hosting a dinner for India’s foreign minister, Subrahmanyam Jaishankar, with whom he will hold talks on Tuesday.

The South Asian foreign ministers were not expected to meet in Washington.