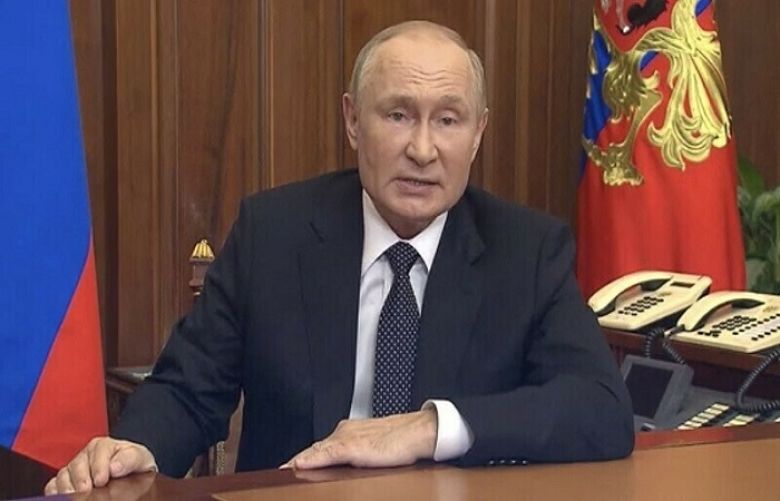 President Vladimir Putin ordered Russian mobilisation to fight in Ukraine on Wednesday and made a thinly veiled threat to use nuclear weapons, in what Nato called a “reckless” act of desperation in the face of Russia’s looming defeat.

Flights out of Russia quickly sold out following the announcement of Russia’s first military mobilisation since World War Two, a dramatic reversal after months in which Moscow had insisted its operation was “going to plan”.

The mobilisation is, for now, officially described as a partial one that will steadily draw in 300,000 reservists over a period of months, rather than a full one that would rely on what Russia’s defence minister says is a vast reserve force of 25 million people.

Putin said, with no evidence, that officials in Nato states had threatened to use nuclear weapons against Russia, and that Russia “also has various means of destruction”.

“When the territorial integrity of our country is threatened, we will certainly use all the means at our disposal to protect Russia and our people. It’s not a bluff,” he said.

Ukrainian President Volodymyr Zelenskiy said he thought Putin would be unlikely to use nuclear weapons, but that the threat showed why it was important to stand up to him.

“Tomorrow Putin can say: ‘Apart from Ukraine, we also want a part of Poland, otherwise we will use nuclear weapons.’ We cannot make these compromises,” Zelenskiy said.

In an interview with Reuters, Nato Secretary-General Jens Stoltenberg denounced Putin’s threat to use nuclear weapons as “dangerous and reckless rhetoric”.

The mobilisation plan demonstrated “that the war is not going according to his plans” and it was clear that the Russian president had made “a big miscalculation”, Stoltenberg said.

As for any potential Russian use of nuclear arms, “We will make sure that there is no misunderstanding in Moscow about exactly how we will react,” Stoltenberg said.

“The most important thing is to prevent that from happening and that is why we have been so clear in our communications with Russia about the unprecedented consequences.”

Putin’s announcement came after weeks in which Russia’s invasion force was routed in northeastern Ukraine, with thousands of Russian troops fleeing frontline positions in the biggest shift in momentum since the war’s early weeks.

Ukrainian forces have captured the main supply routes serving Russia’s front line in the east and say they are now poised to push deeper into territory that Moscow had captured over months of heavy fighting.

Zelenskiy adviser Mykhailo Podolyak called Putin’s address an “absolutely predictable appeal, which looks more like an attempt to justify their own failure”.

“The war is clearly not going according to Russia’s scenario and therefore required Putin to make extremely unpopular decisions to mobilise and severely restrict the rights of people,” Podolyak told Reuters in a text message.