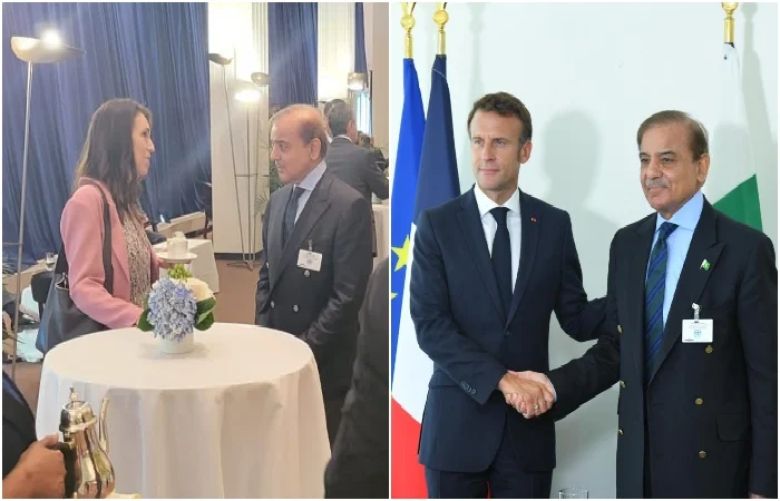 The prime minister  met President of France Emmanuel Macron on the sidelines of the 77th UNGA session.

PM Shehbaz is currently in New York to attend the 77th session of UNGA, starting today (Tuesday), the first in-person session since 2019 after which all meetings were made virtual due to the pandemic.

In a post shared on Twitter by the Prime Minister's Office, the premier could be seen holding a discussion with PM Arden.

"Prime Minister Shehbaz Sharif interacts with Jacinda Ardern, Prime Minister of New Zealand at the welcoming reception by UN Secretary-General for Heads of State/Government participating in the seventy-seventh session of UNGA," read the caption.

Moreover, PM Shehbaz also interacted with the Federal Chancellor of the Republic of Austria Karl Nehammer at the UN.

Earlier today, PM Shehbaz said that he was there "to tell Pakistan's story to the world."

"A story of deep anguish and pain arising out of a massive human tragedy caused by floods. In my address at UNGA and bilateral meetings, I will present Pakistan's case on issues that call for the world's immediate attention," the premier wrote.

He will address the session on September 23.

The premier will hold a number of bilateral meetings with his counterparts from various countries, the President of the General Assembly, the UN Secretary-General as well as heads of International Organisations, IFIs and philanthropic organisations. Leaders will also have the opportunity to interact during the receptions hosted by the UN Secretary-General and the President of the United States.