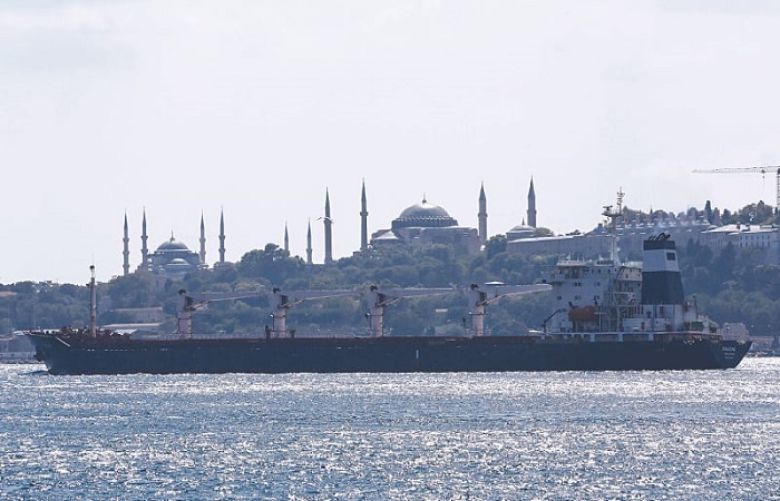 The first shipment of grain from Ukraine since the Kremlin’s invasion five months ago sailed through Istanbul on Wednesday under a landmark deal designed to help alleviate a global food crisis sparked by the war.

The Sierra Leone-flagged Razoni’s voyage from the Black Sea port of Odessa to Lebanon is being watched closely for signs of how the first agreement signed by Moscow and Kyiv since Russia invaded its pro-Western neighbour holds.

A deal brokered by Turkey and the United Nations last month lifted a Russian naval blockade of Ukraine’s Black Sea cities and set terms for millions of tonnes of wheat and other grain to start flowing from filled silos and ports.

Ukraine exports roughly half of the sunflower oil used on the world market and is one of the world’s main suppliers of grain. An almost complete halt to its exports helped push up global food prices and make imports prohibitively expensive in some of the poorest countries in the world.

The Razoni took 26,000 tonnes of maize through a specially designated corridor in the mine-infested waters of the Black Sea before reaching the northern edge of the Bosphorus Strait on Tuesday.

A team of 20 inspectors from the two warring parties and the UN and Turkey strapped on orange helmets and boarded the ship early on Wednesday for a mandated inspection that officials said lasted less than 90 minutes.

The ship’s passage is being overseen by an international team that includes Russian and Ukrainian officials in Istanbul.

“This marks the conclusion of an initial ‘proof of concept’ operation to execute the agreement between the Russian Federation, Turkey, Ukraine and the United Nations,” the team said after the ship was cleared to pass through Istanbul.

The 186-metre (610-foot) long vessel now moves on to the Sea of Marmara and the Aegean before it is set to reach the coast of Lebanon in the coming days. Kyiv says at least 16 more grain ships are waiting to depart.

But it also accuses Russia of stealing Ukrainian grain in territories seized by Kremlin forces, then shipping it to allied countries such as Syria. Turkish hopes that the deal could help build trust and lead to ceasefire talks have so far been disappointed.