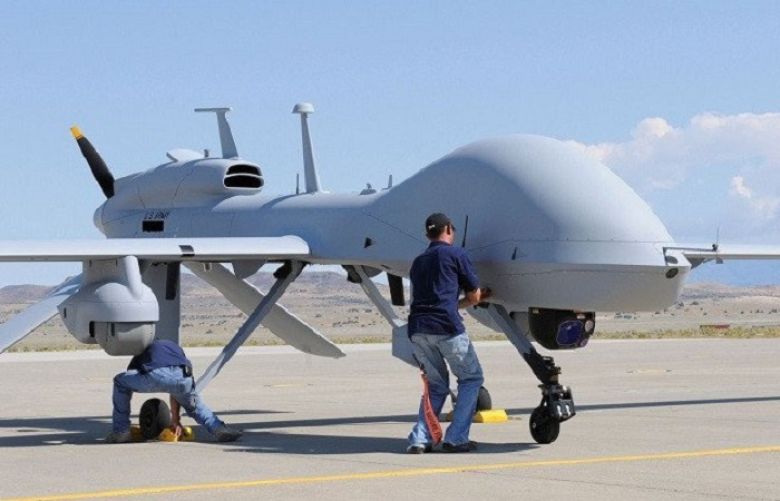 The Biden administration plans to sell Ukraine four MQ-1C Gray Eagle drones that can be armed with Hellfire missiles for battlefield use against Russia, three people familiar with the situation said.

The sale of the General Atomics-made drones could still be blocked by Congress, the sources said, adding that there is also a risk of a last minute policy reversal that could scuttle the plan, which has been under review at the Pentagon for several weeks.

Ukraine has been using several types of smaller shorter range unmanned aerial systems against Russian forces that invaded the country in late February. They include the AeroVironment RQ-20 Puma AE, and the Turkish Bayraktar-TB2.

But the Gray Eagle represents a leap in technology because it can fly up to 30 or more hours depending on its mission and can gather huge amounts of data for intelligence purposes. Gray Eagles, the Army's version of the more widely known Predator drone, can also carry up to eight powerful Hellfire missiles.

The sale is significant because it puts an advanced reusable US system capable of multiple deep strikes on the battlefield against Russia for the first time.

The administration of President Joe Biden intends to notify Congress of the potential sale to Ukraine in the coming days with a public announcement expected after that, a US official said.

Money from the recently passed $40 billion Ukraine Security Assistance Initiative has been set aside to fund both the possible sale and the training needed for the drones, the US official and one of the people familiar said.

"Generally the MQ-1C is a much larger aircraft with a max take-off weight around three times that of the Bayraktar-TB2, with commensurate advantages in payload capacity, range, and endurance," said drone expert Dan Gettinger with the Vertical Flight Society.

The MQ-1C is also compatible with a greater variety of munitions than the Bayraktar-TB2. The Ukrainian Bayraktars are equipped with 22 kg (48 pound) Turkish-made MAM-L missiles, around half the weight of a Hellfire.

Training on the UAV system made by General Atomics usually takes months, Gettinger said, but a notional plan to train experienced Ukrainian maintainers and operators in a handful of weeks has been proposed in recent weeks, the sources said.

Arming the drones with Hellfire missiles will be done via a future Presidential Drawdown Authority once training on the drones has been completed, the US official and one of the sources said.

Up until an announcement on Wednesday that Ukraine would get four HIMARS rocket systems, the Pentagon has stressed that smaller systems such as Javelin anti-tank systems and Stinger anti-aircraft missiles, which allies are shipping to Ukraine via truck near-daily, are most useful.

The Kremlin said on Thursday that US plans to sell Ukraine four MQ-1C Gray Eagle drones that can be armed with Hellfire missiles for battlefield use would not change the parameters of what Russia calls its special military operation.

Reuters reported on the Biden administration's plans to sell the drones on Wednesday. The transaction could still be blocked by Congress or derailed by a last-minute policy reversal.

"Pumping (Western) weapons into Ukraine does not change all the parameters of the special operation," Kremlin spokesperson Dmitry Peskov told reporters on a conference call. "Its goals will be achieved, but this will bring more suffering to Ukraine ..."

Of the possibility that Russian territory could be targeted from Ukraine with the new weapons, Peskov said: "I still do not want to talk about absolutely undesirable and very unpleasant scenarios in which these weapons could hypothetically be used against targets on our territory.

"This would significantly shift the situation towards an unfavourable direction," he added.

Russia has tried to intercept and destroy Western weapons supplies to Ukraine since it sent troops into its neighbour on Feb. 24.

Moscow says Western arms deliveries for Kyiv and sanctions against the Russian economy amount to a "proxy war" by the United States and its allies.