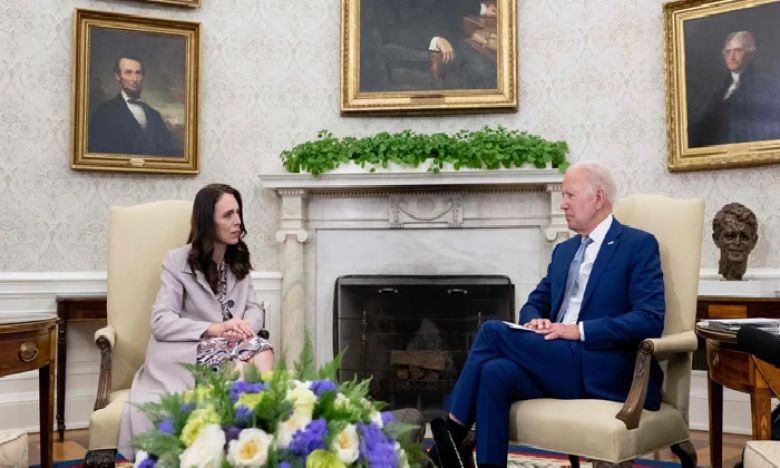 Meeting in the Oval Office with Ardern, Biden referred to the 2019 Christchurch slaying of 51 people in mass shootings targeting Muslims.

"We need your guidance," Biden said, referring to the broad US-New Zealand partnership, but particularly on what he called a "global effort to counter violence and extremism online."

"I want to work with you on that effort," he added.

Biden, who visited the Texan town of Uvalde on Sunday to mourn the deaths of 19 children and two teachers slain by a gunman using an assault-style rifle, said there was an "awful lot of suffering" and that "much of it is preventable."

But with the United States awash in privately held firearms and the right to own weapons enshrined in the constitution, the Democrat faces an uphill struggle to get even the most modest new restrictions approved in Congress.

There is little chance of banning assault-style semi-automatic rifles like the AR-15, a model used in both the Texas and New York shootings yet also hugely popular among ordinary Americans for its ease of use and sleek, military-style look.

Biden supports an assault weapons ban but there are so far not enough Republicans in the evenly split Senate to get a working majority.

Even his potentially less controversial proposal for increased background checks on gun purchasers may sink in the Senate.

The political resistance to tampering with easy access to firearms contrasts starkly with not only New Zealand and the closest US allies in Asia and Europe, but neighboring Canada.

There, Prime Minister Justin Trudeau on Monday proposed banning sales of handguns, despite his country having far rarer experiences of mass shootings than across the border.

Nothing similar can be expected in the United States, Press Secretary Karine Jean-Pierre said Tuesday.

Biden "does not support a ban on the sale of all handguns," she underlined. "We’ll leave it up to other countries to set their polices on gun ownerships."

Under pressure from Democrats to show the government is at least trying to respond to the ever-growing toll, Biden told reporters he would "meet with the Congress on guns, I promise you."

Ardern offered condolences over the Texas and New York murders, saying that "our experience in this regard is our own, but if there is anything we can share that would be of any value we are here to share it."