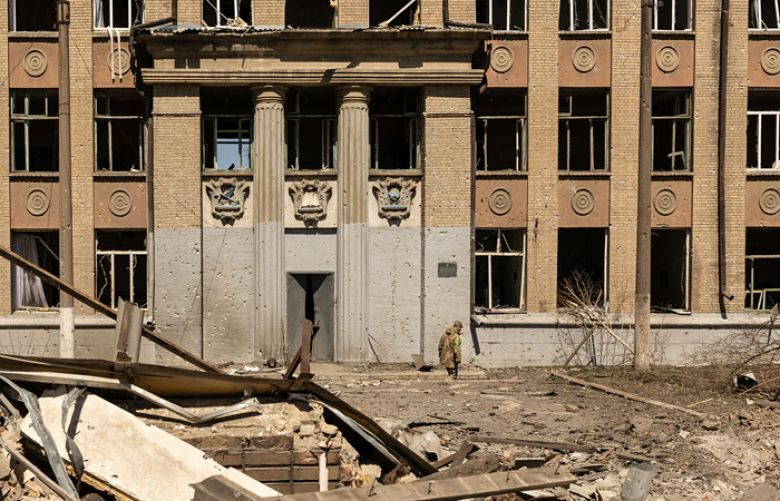 A Russian strike on a school sheltering civilians claimed 60 lives, Ukraine said , as the G7 reaffirmed their unity with Kyiv on the eve of Moscow’s plans for a flashy World War II victory commemoration.

As intense fighting continued, Ukrainian President Volodymyr Zelensky confirmed the death toll in Saturday’s Russian air strike on a school in the eastern village of Bilogorivka. That would be one of the highest one-day tolls since Russia invaded on February 24.

Russian President Vladimir Putin leads commemorations Monday of the Soviet Union’s defeat of Nazi Germany, but Ukraine, under unrelenting attack, is desperate to deny Moscow any sense of military invigoration.

Putin is expected to flaunt Russia’s military might during the symbolically important event. Huge intercontinental ballistic missiles will be towed for official review through Moscow’s Red Square, and a planned flyover will feature fighter jets in a "Z" formation showing support for the war.

The Victory Day parade is a longtime tradition in Russia, but Monday’s has taken on great prominence as Putin seeks to justify a war that has gone on far longer -- and at far higher cost -- than expected.

Putin has sought to legitimise the invasion by comparing it with the previous struggle against Nazism and the national pride it brought.

"Today, our soldiers, as their ancestors, are fighting side by side to liberate their native land from the Nazi filth with the confidence that, as in 1945, victory will be ours," Putin said.

Zelensky also marked the end of the 1939-1945 war by comparing Ukraine’s battle for national survival to the region’s war of resistance against its former Nazi occupiers.