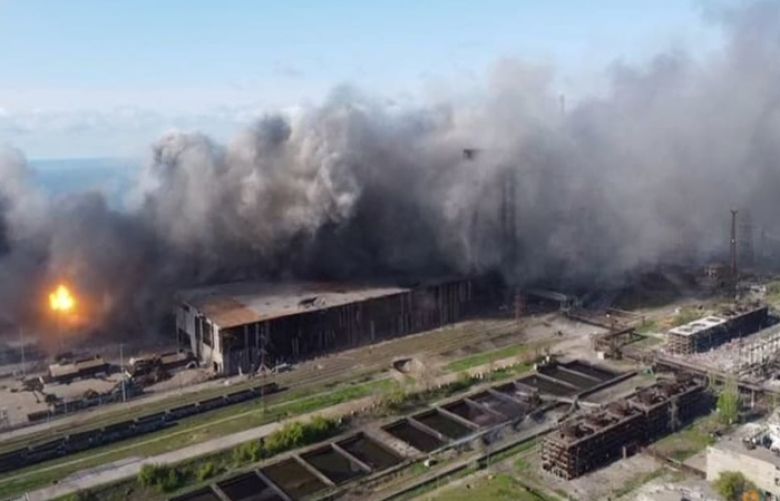 Scores of Ukrainian civilians including women and children remained trapped on Thursday (May 5) in a Mariupol steel works that has been rocked by heavy explosions as Russian forces fight for control of Ukraine s last stronghold in the ruined port city.

The United Nations said a new operation was underway to evacuate more people from Mariupol and the Azovstal steel plant, where an estimated 200 civilians are still holed up in underground bunkers with little food or water.

President Vladimir Putin said Russia was prepared to provide safe passage out for civilians, but reiterated calls for Ukrainian forces inside to disarm. Clinging on desperately, Ukrainian fighters have reported fierce battles with Russian troops.

Putin declared victory over Mariupol on Apr 21 and ordered his forces to seal off the Soviet-era plant but not venture inside its underground tunnel network. The Kremlin denies Ukrainian allegations Russian troops stormed the plant in recent days.

Reuters verified the footage location by matching buildings with satellite imagery, but was unable to identify when the video was filmed.

UN Secretary-General Antonio Guterres told the Security Council that a third operation was underway to evacuate civilians from Mariupol and Azovstal. In joint efforts with the Red Cross, the UN has helped nearly 500 civilians flee the area over the past week.

"I hope that the continued coordination with Moscow and Kyiv will lead to more humanitarian pauses to allow civilians safe passage from the fighting, and aid to reach those in critical need," Guterres said.

"We must continue to do all we can to get people out of these hellscapes." Guterres declined to give details on the new operation "to avoid undermining possible success."

Ukraine s deputy prime minister, Iryna Vereshchuk, said people would be evacuated from Mariupol on Friday at noon, but gave no further details.