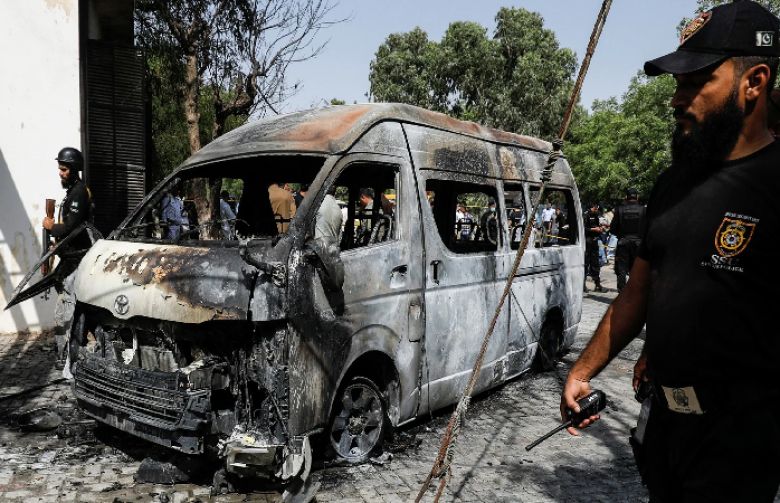 China has expressed its strong condemnation of the Karachi suicide attack and extended deep condolences to the victims and sympathies to the families of the injured and bereaved.

“The Chinese side expresses strong condemnation and indignation over this major terrorist attack and extends deep condolences to the victims and sympathies to the injured and bereaved families,” a Chinese Foreign Ministry spokesperson said on Wednesday.

“On the afternoon of April 26, a van of the Confucius Institute at the University of Karachi was hit by a suicide terrorist attack. So far, the incident has left three Chinese teachers dead and one injured. There are also casualties on the Pakistani side,” he said in a statement issued here.

The spokesperson said that the Chinese Foreign Ministry and diplomatic missions in Pakistan had activated the emergency response mechanism immediately after the incident.

He demanded that the Pakistani side should immediately make a thorough investigation of the incident, apprehend and punish the perpetrators to the full extent of the law, and take all possible measures to ensure the safety of Chinese citizens in Pakistan and prevent such incidents from happening again.

“The Chinese Embassy in Pakistan and Consulate-General in Karachi are working with the Pakistani side to deal with the follow-up matters of the casualties,” the spokesperson said.

We strongly condemn the terrorist attack targeting Chinese teachers at University of Karachi and express our condolences to the victims. Nothing will undermine China-Pakistan friendship.

Prime Minister Shehbaz Sharif visited the Chinese Embassy in Islamabad on the evening of April 26 to convey condolences, saying that the government will conduct an in-depth probe into the incident, give exemplary punishment to the perpetrators, and strengthen the security of Chinese personnel, projects and institutions in Pakistan in an all-round way.

He said his government will never allow any force to undermine the Pakistan-China friendship. Local authorities in Sindh and Karachi have launched a full-scale investigation to hunt down the perpetrators.

The spokesperson said that the Chinese Foreign Ministry and Chinese diplomatic missions in Pakistan would continue to urge relevant Pakistani departments to handle the follow-up matters properly of those killed, treat the injured, and resolutely crackdown on the terrorist organisation involved.

“The blood of the Chinese people should not be shed in vain, and those behind this incident will surely pay the price,” added PM Shehbaz.

Meanwhile, Pakistan's ambassador to China has expressed shock and mourned the loss of precious lives including Chinese nationals in the Karachi terrorist attack.

“The entire nation is in shock and mourns the loss of these precious lives including our Chinese friends,” he said in a message.

He said that this cowardly act was a direct attack on the Pakistan-China friendship and ongoing cooperation.