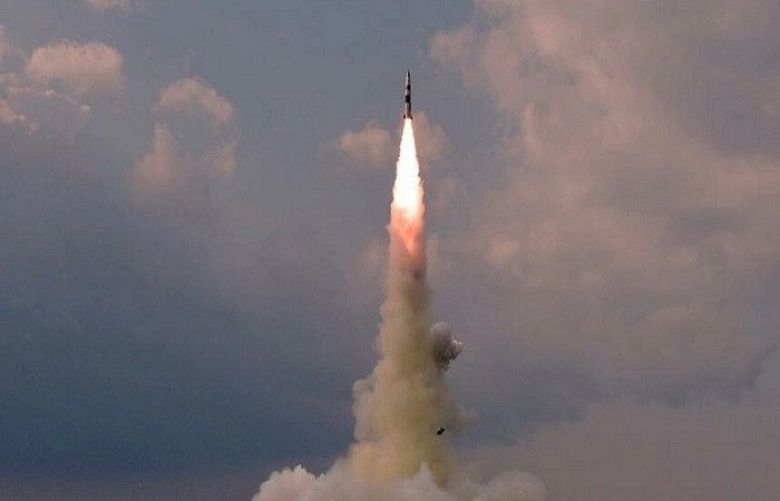 North Korea on Wednesday fired a ballistic missile toward the East Sea in the first such test of the new year, South Korea and Japan said.

The South’s Joint Chiefs of Staff (JCS) said the missile was fired eastward this morning from a land-based platform, Yonhap News Agency reported.

"For additional information, the intelligence authorities of South Korea and the United States are conducting a detailed analysis," said the JCS.

This is the first missile test by North Korea in the new year as in October last year Pyongyang fired off a new submarine-launched ballistic missile, the report said.

"This morning, North Korea test-fired an unidentified short-range projectile. Because of this, there are concerns that tensions could rise and a stalemate of inter-Korean relations could further deepen," Moon said while speaking at a groundbreaking ceremony for a railway at an inter-Korean border town.

Last year, North Korea carried out its eighth missile test as Pyongyang pushes back against what it sees as “hostile policies” of the US and South Korea.

North Korea is barred from employing ballistic missile technology by United Nations Security Council resolutions, while the country has been under the UNSC's military and economic sanctions since 2006 because of its nuclear program.

Japan’s Defense Minister Kishi Nobuo told reporters that there was no damage to Japanese aircraft or ships.

According to Japanese NHK News, Kishi “will work closely with relevant countries including the US and South Korea” on the issue.

Kishi revealed North had made around 40 launches since May 2019.

“Based on the latest launch, the government will consider all possible options, including possessing the ability to strike enemy bases,” he added.