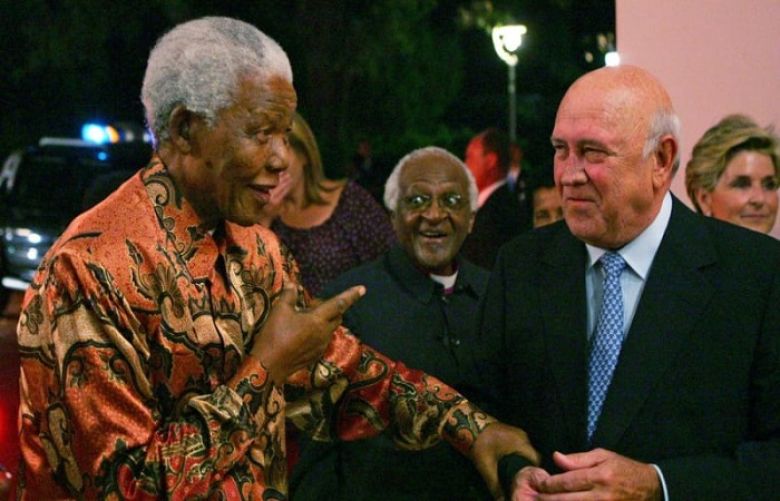 De Klerk stunned the world when he scrapped apartheid and negotiated a peaceful transfer of power to a Black-led government under Nelson Mandela.

But while he was feted globally and shared the Nobel Peace Prize with the revered Mandela, de Klerk earned only scorn from many Blacks outraged by his failure to curb political violence in the turbulent years leading up to all-race elections in 1994.

And many right-wing white Afrikaners, descendants of Dutch and French settlers who had long ruled the country under de Klerk's National Party, viewed him as a traitor to their causes of nationalism and white supremacy.

De Klerk's metamorphosis from a servant of apartheid into its wrecking ball mirrored that of the former Soviet Union's Mikhail Gorbachev. Both were good party men who rose to the pinnacle of power before moving to reform or dismantle the systems that had nourished them for decades.

The collapse of Gorbachev's Soviet Union and communism in Eastern Europe helped pave the way for de Klerk to launch his own bold initiatives, as it removed the spectre of the "Red Menace" that had haunted a generation of white South Africans.

"The first few months of my presidency coincided with the disintegration of communism in Eastern Europe," de Klerk wrote in his autobiography, "The Last Trek: A New Beginning".

"Within the scope of a few months, one of our main strategic concerns for decades was gone," he wrote. "A window had suddenly opened which created an opportunity for a much more adventurous approach than had been previously conceivable."

Less than three months after the collapse of the Berlin Wall, he opened the way for an end to more than four decades of apartheid with a bombshell speech to parliament on February 2, 1990, that "unbanned" the African National Congress (ANC) and announced the release of its leader after 27 years behind bars.

Fearing a leak and a backlash from right-wing whites, de Klerk had kept the momentous decision secret from all but a handful of cabinet ministers. Even his wife was in the dark until she and de Klerk were heading to parliament.

At de Klerk's 70th birthday celebrations in 2006, Mandela heaped praise on his predecessor for taking that leap into the political unknown.

"You have shown courage that few have done in similar circumstances," said Mandela, who died in December 2013 at the age of 95, less than six months before the 20th anniversary of South Africa's first all-race elections.

A lawyer from a prominent Afrikaner political dynasty, the urbane de Klerk was cut from the cloth of white apartheid rule and was a member of the Broederbond, a secret Afrikaner society dedicated to white supremacy.

De Klerk launched his parliamentary career in 1972 as a member of the right-wing mining town of Vereeniging and was for several years minister in charge of a schooling system that spent 10 times more on white children than on Blacks.

He challenged then-finance minister Barend du Plessis in the 1989 party election of a successor to ailing apartheid hardliner PW Botha and then ousted Botha from the presidency in a cabinet coup a few months later.

Botha showed no remorse for apartheid until his death in 2006 aged 90.

De Klerk's rise was viewed as a consolidation of white rule and threatened to escalate the vicious racial conflict that already had killed more than 20,000 Blacks.

"When he became head of the National Party, he seemed to be the quintessential party man, nothing more and nothing less. Nothing in his past seemed to hint at a spirit of reform," Mandela wrote in his autobiography, "Long Walk to Freedom".

The negotiations on a peaceful transition to non-racial democracy that followed Mandela's release were held against the backdrop of mounting political violence and often looked as though they would be derailed, a scenario that would almost certainly have plunged the nation into a bloody race war.

Black and white analysts said de Klerk was too cautious in moving against security force right-wingers suspected of fomenting violence and of being out of touch and ill-informed about the horrific gun and spear attacks in Black communities.

But peace prevailed in what many commentators refer to as a "political miracle".

In 1993 de Klerk shared a Nobel Peace Prize with Mandela, who would win the presidency the following year in the first multi-racial elections in Africa's biggest economy.

After the vote, the National Party shared power in a "Government of National Unity" in which he served as a deputy president.

But the relationship between de Klerk, a chain-smoking whisky drinker, and the austere Mandela was often strained, and de Klerk pulled out of the government in 1996, saying the ANC no longer prized his advice or guidance.

He retired from active politics in 1997 and later apologised for the miseries of apartheid before Archbishop Desmond Tutu's Truth and Reconciliation Commission.

"History has shown that as far as the policy of apartheid was concerned, our former leaders were deeply mistaken in the course upon which they embarked," he said.

In retirement, he headed the FW de Klerk Foundation, devoted to working for peace in multi-cultural societies.

He divorced his wife of 39 years, Marike, in 1998, and married Elita Georgiadis, the wife of a Greek shipping tycoon.

In December 2001, Marike was murdered in her luxury beachfront home in Cape Town, an incident that underscored South Africa's rampant rates of violent crime.

In an interview with Reuters in 1999, de Klerk said South Africa faced an array of threats ranging from crime to rising unemployment and discontent among potential voters.

"There is growing disillusionment among all sectors of the population in South Africa. All South Africans, all investors, all people with an interest in South Africa are deeply concerned about the crime rate. We need a breakthrough," he said.

However, 10 years later he sought to strike a more balanced tone, saying shortly after President Jacob Zuma's accession to power in 2009 that the polygamous Zulu traditionalist would "confound the prophets of doom".

"Tata, we will miss you," he said in a statement, using the affectionate South African term for grandfather by which Mandela was known.

As he walked away from Mandela's body lying in state at Pretoria's Union Buildings, where two decades earlier he handed over power, de Klerk wiped a tear from his eye.