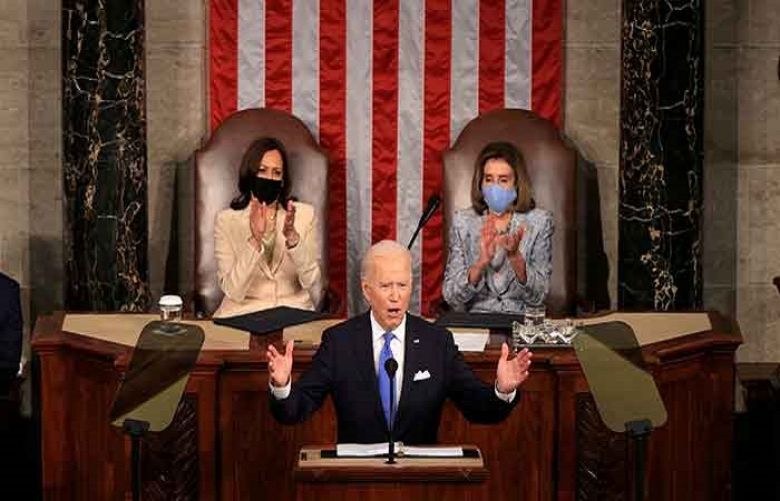 As US President Joie Biden shared his ambitious agenda to Congress, his real test begins now of convincing Republicans, in a polarised political arena, to support his plan of remaking America.

The 78-year-old had been seeking the highest office in the land for nearly four decades.

Now that he has it, Biden has unveiled a series of massive spending programs — on jobs creation, infrastructure, and family-centered programs like child care and student aid — that would make even the most passionate progressive blush.

"Trickle down economics has never worked, and it's time to grow the economy from the bottom and the middle out," he told a joint session of Congress on Wednesday night, drawing an ovation from his fellow Democrats.

And while he presented an outstretched hand of bipartisanship to Republicans — "Let's get to work" together, he invited them — his vision of broad cooperation between the two parties seems far removed from today's reality of a sharply divided Congress.

Republicans have already openly cringed at the price tag which, they point out, amounts to a staggering $6 trillion when the recently enacted coronavirus rescue package is factored in.

And they are assailing Biden for abandoning his pledge to forge national unity in order to try to ram through what they call his radical socialist agenda.

Having crossed the symbolic milestone Thursday of his 100th day in office, Biden is counting on his party's razor-thin majorities in the House of Representatives and Senate.

He may also seek to use the procedure known as budget reconciliation to get his big-ticket items through the 100-seat Senate with a simple majority, circumventing the blocking tactic which normally would require 60 votes to advance.

Even then, with the Senate locked 50-50 and Vice President Kamala Harris the tie-breaking vote, he can afford zero defections.

"There's just no margin for error at all, unless Biden can somehow get Republican buy-in," said Kyle Kondik, a political science expert at the University of Virginia.

"But that would take accepting a much less ambitious plan than Biden wants."

A watering down may sway some key Democratic moderates and even bring a few Republicans on board, but it risks losing support from crucial liberal allies like congresswoman Alexandria Ocasio-Cortez and Senator Bernie Sanders.

"The parties just don't see eye to eye on these proposals," Kondik said.

Discontent has surged within Republican ranks against a president who they say has abandoned his centrist origins to placate the far left.

"He needs to quit listening to the 'Sandernistas,'" Republican Senator Chuck Grassley told AFP, playing on the name of Sanders, a self-described democratic socialist.

Compromise is key if Biden wants Democratic priorities to reach his desk and be signed into law, stressed Grassley, a longtime Senate colleague who recalled Biden as a lawmaker eager to find common ground.

The Senate's top Republican Mitch McConnell reminded Americans how they elected an evenly-split Senate and a closely-divided House, "and a president who preached moderation" and unity on the campaign trail.

"But the first 100 days have left much to be desired," he said, adding "it's not too late" for Biden to foster consensus.

Jenna Bednar, a professor of political science and public policy at the University of Michigan, said Biden's approach has been "soft-shoe," letting his actions speak louder than words — a contrast with his combative predecessor Donald Trump.

But Biden must above all convince Republicans, and skittish Democrats, "that his policies are very popular with their constituents" back home, Bednar said.

As if to highlight the point, Biden flew to Georgia Thursday to sell his proposals in person.

He has received blowback from Republicans over plans to slap higher taxes on corporations and the wealthiest Americans to help pay for the spending on families and infrastructure.

But he insisted he has no intention of raising taxes on the middle class.

"I'm not looking to punish anybody," he told Congress.

House Democrat Eric Swalwell expressed optimism that Biden can transform his proposals into law, as he did with the pandemic plan.

The question is, "are Republicans here (in Washington) going to align with where Republicans are across the country?" Swalwell told AFP.