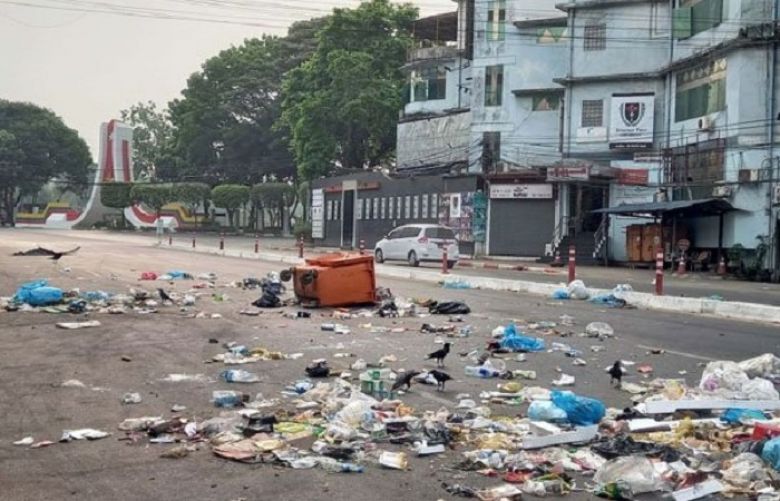 Rubbish piled up on the streets of Myanmar’s main city on Tuesday after activists launched a “garbage strike” to oppose military rule as the toll of pro-democracy protesters killed by the security forces since a Feb. 1 coup rose to more than 500.

Security forces shot and killed one man in the southernmost town of Kawthaung as they cleared the streets, the Mizzima news portal reported, and one person was killed in the northern town of Myitkyina, a relative of the 23-year-old victim told Reuters.

Police and a junta spokesman did not answer calls seeking comment.

Myanmar has been in turmoil since the army ousted an elected government led by Nobel laureate Aung San Suu Kyi, re-imposing military rule after a decade of tentative steps towards democracy.

At least 512 civilians have been killed in nearly two months of protests against the coup, 141 of them on Saturday, the bloodiest day of the unrest, according to the Assistance Association for Political Prisoners (AAPP) advocacy group.

Alongside the protests, a civil disobedience campaign of strikes has paralysed large parts of the economy. In a new tactic, protesters sought to step up the campaign by asking residents to leave garbage at intersections in the main city of Yangon.

“This garbage strike is a strike to oppose the junta,” read a poster on social media. “Everyone can join.”

Thousands of protesters came out to march in several other towns across the country on Tuesday, according to media and photos on social media.

On Monday, 14 civilians were killed, including at least eight in Yangon’s South Dagon neighbourhood, the AAPP said.

Security forces there fired a heavier calibre weapon than usual towards protesters crouching behind a barricade of sand bags, witnesses said. It was not immediately clear what weapon it was but it was believed to be some type of grenade launcher.

State television said security forces used “riot weapons” to disperse a crowd of “violent terrorist people” who were destroying a pavement and one man was wounded.

A South Dagon resident said on Tuesday there had been no pause in the crackdown.

“There was shooting all night,” said the resident, who declined to be identified.

Residents found a badly burned body in the morning, the witness said, adding it was not known what had happened to the person and the military took the body away.