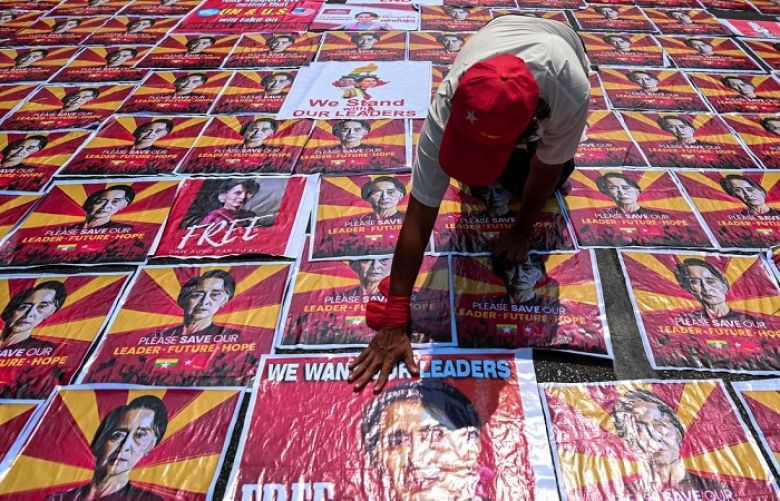 Indonesia is holding intensive talks with both the Myanmar military and representatives of the ousted elected government in a bid to end a crisis over a Feb. 1 military coup, Indonesia’s foreign minister said on Wednesday.

The Myanmar army seized power after alleging fraud in a Nov. 8 election swept by Aung San Suu Kyi’s National League for Democracy (NLD), detaining her and much of the party leadership.

Opponents of the coup have staged days of demonstrations in towns and cities across Myanmar and three protesters and one policeman have been killed in violence.

The Indonesian effort to resolve the crisis has raised suspicion among Myanmar democracy activists who fear dealing with the junta would confer legitimacy on it and its bid to scrap the November election.

They insist the election result should be respected.

Retno, speaking to reporters in Bangkok, said the wellbeing of the people of Myanmar was the number one priority.

“We ask for everybody to use restraint and not resort to violence ... to avoid casualties and bloodshed,” Retno said after her talks with the Myanmar minister and her Thai counterpart, Don Pramudwinai.

Retno said she had “intensive” communications with both sides, including ousted lawmakers from the parliament, known as Pyidaungsu Hluttaw. Members of the lawmakers’ group, the Committee Representing Pyidaungsu Hluttaw (CRPH), were not immediately available for comment.

A Reuters report this week cited sources as saying Indonesia was proposing that ASEAN members send monitors to ensure the generals stick to their promise of fair new elections. That added to suspicion among some pro-democracy activists that Indonesia’s intervention would undermine their demand that last year’s election must stand.

The military has not given a time frame for the new election it has promised, although it imposed a one-year state of emergency when it seized power.

Dozens of protesters gathered outside the Thai embassy in the main city of Yangon with signs reading: “Respect our vote” and “We voted NLD”.

“Our foreign minister is Aung San Suu Kyi,” the protesters chanted, referring to the post she held in the government she led after winning a 2015 election in a landslide.

Retno did not mention the issue of the election but said Indonesia emphasised “the importance of an inclusive democratic transition process”.

“We need a conducive condition ... in the form of dialogue, reconciliation, trust building,” she said. “Indonesia will be with the people of Myanmar.”

Retno had been expected to fly to Myanmar earlier on Wednesday but the plan was dropped, her ministry said.

Prayuth, a former army chief who seized power in a 2014 coup, declined to confirm that he met the Myanmar minister.

“Some things are not official,” he told reporters.

“We offer support as an ASEAN country that has to cooperate and offer well-wishes that everything works out smoothly.”

Earlier, the Myanmar-based Future Nation Alliance activist group said in a statement a visit to Myanmar by Retno would be “tantamount to recognising the military junta”.

The group instead demanded foreign officials meet Htin Lin Aung, a member of the CRPH who was the “sole responsible official for foreign relations”.

Protesters, some leading a procession of elephants, marched in Myanmar’s second biggest city, Mandalay, in support of the ousted parliamentarians on Wednesday.

Myanmar’s security forces have shown more restraint compared with earlier crackdowns against people who pushed for democracy during almost half a century of direct military rule.

Military chief General Min Aung Hlaing has said this week authorities were following a democratic path in dealing with the protests and police were using minimal force, such as rubber bullets, state media reported.

The crisis has restored Myanmar’s reputation as the problem member of the 10-country ASEAN and the diplomatic scramble by its neighbours comes as wider international concern is growing.

The Group of Seven (G7) rich nations on Tuesday condemned intimidation and oppression of those opposing the coup.

The United States, Britain and others have imposed limited sanctions, aimed at members of the junta and military businesses.

China has traditionally taken a softer line on Myanmar as have ASEAN neighbours.