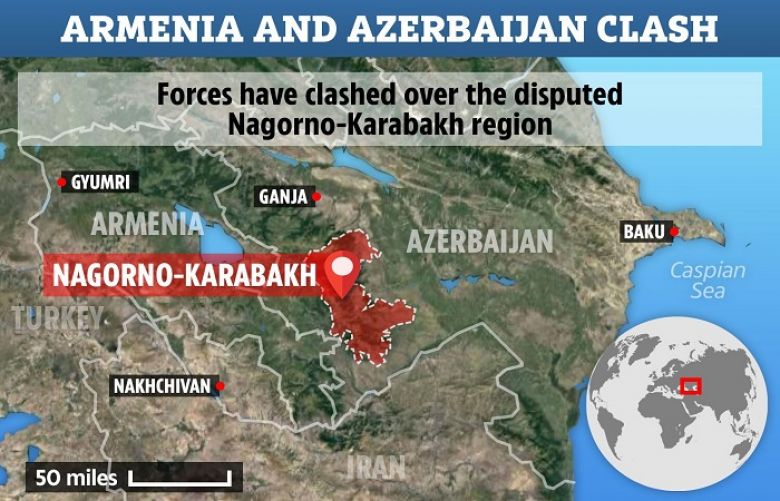 Armenia and Azerbaijan accused each other of violating the terms of the Russia-brokered ceasefire in Nagorno-Karabakh on Sunday, which was aimed to end the worst outbreak of hostilities in the separatist region in more than 25 years.

The ceasefire, clinched after marathon talks in Moscow advocated by President Vladimir Putin, was meant to halt fighting to allow ethnic Armenian forces in Nagorno-Karabakh and Azeri forces to swap prisoners and war dead.

The Moscow talks were the first diplomatic contact between the two since fighting over the mountainous enclave erupted on Sept. 27, killing hundreds of people.

The enclave is internationally recognised as part of Azerbaijan but is populated and governed by ethnic Armenians.

Within minutes of the truce taking effect from midday, both sides accused each other of breaking it.

The Armenian defence ministry accused Azerbaijan of shelling a settlement inside Armenia, while ethnic Armenian forces in Karabakh alleged that Azeri forces had launched a new offensive five minutes after the truce took hold and killed two civilians.

Azerbaijan said enemy forces in Karabakh were shelling Azeri territory and that one civilian had been killed. Both sides have consistently denied each others’ assertions in what has also become a war of words accompanying the fighting.

Azeri President Ilham Aliyev told Russia’s RBC news outlet the warring parties were now engaged in trying to find a political settlement, but suggested there would be further fighting ahead.

“We’ll go to the very end and get what rightfully belongs to us,” he said.

Azeri Foreign Minister Jeyhun Bayramov said the truce would last only for as long as it took for the Red Cross to arrange the exchange of the dead.

Speaking at a briefing in Baku, he said Azerbaijan hoped and expected to take control of more territory in time.