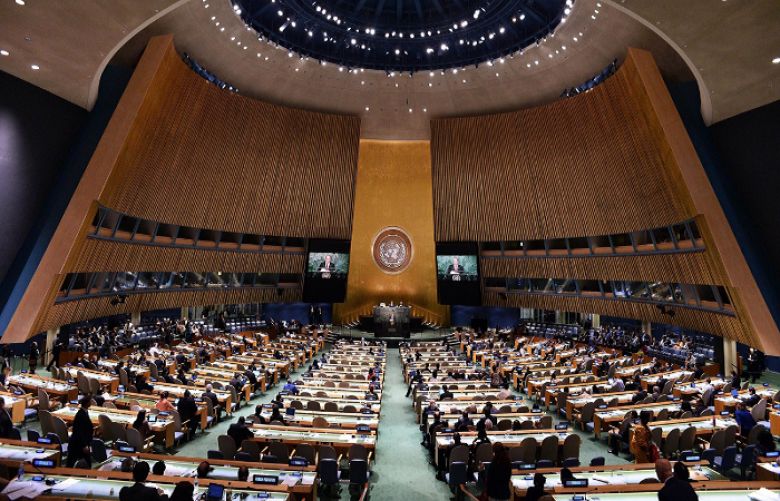 The annual meetings of the United Nations began in New York on Monday with Kashmir on the agenda as an unresolved dispute.

In doing so, the world body ignored India’s efforts to remove the 72-year old issue from the UN Security Council’s agenda for this year. The council’s Resolution 47, which calls for a peaceful resolution of the Kashmir dispute, was adopted on April 21, 1948.

In his speech to the 75th UN General Assembly (UNGA), Prime Minister Imran Khan “will once again project the cause of the Kashmiri people and call for international action to end India’s massive human rights violations,” said Munir Akram, Pakistan’s permanent representative to the UN.

The prime minister will also seek the undoing of illegal measures that India has imposed in Kashmir since Aug 5, 2019, when it forcibly merged the occupied territory with the union, he added.

Mr Khan will address the UNGA on Sept 25 and will also participate in a high-level meeting on Illicit Financing and the Summit on Biodiversity. All these are virtual events as the Covid-19 pandemic has prevented world leaders from physically attending the 75th UNGA.

Since the illegal merger, India has been continuously trying to get the Kashmir issue removed from the council’s agenda, but Pakistan has successfully thwarted its moves.

The Security Council’s agenda is set in accordance with the established rules and procedures and can only be changed by a consensus. A member state cannot change the agenda unilaterally.

“We hope the General Assembly will uphold the right of self-determination and that human rights bodies will demand access to investigate India’s violations,” Ambassador Akram said.

Besides Kashmir, Pakistan will also work with other Muslim countries to get decisions that denounce Islamophobia and protect Islamic religious sites.

Pakistan will also join other developing nations to promote their objectives in finance, debt relief, infrastructure investment and science and technology, Ambassador Akram said. Pakistan presently holds the Presidency of the UN Economic and Social Council.

“The future we want, the United Nations we need: reaffirming our collective commitment to multilateralism,” is the theme for the 75th session of the UN.