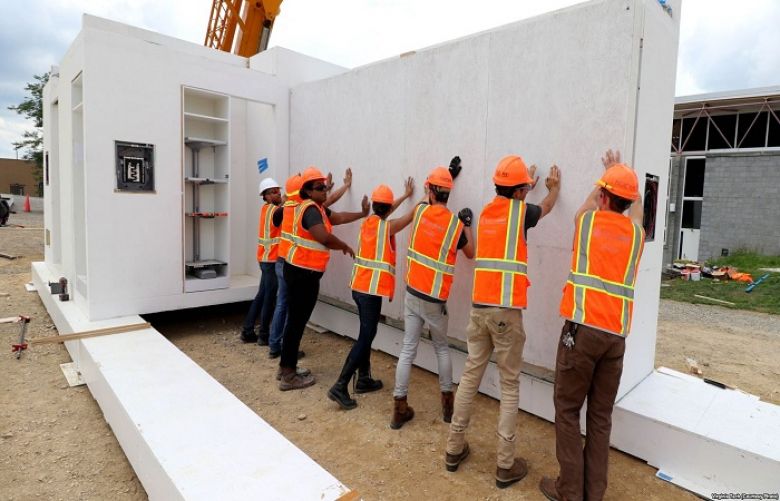 Virginia Tech students erect a futuristic solar home as they prepare to compete in the Solar Decathlon Middle East, an international collegiate competition to build the world’s smartest solar home.

Joseph Wheeler and his team of students and faculty from Virginia Tech University are convinced they are building the house of the future.

“We set it up in two days,” Wheeler told media. “All the other teams took the full two weeks of construction. Ours was set up in two days, generating power on the third day by the sun.”

The quick assembly time is just one thing that makes this home special. All of, literally all of it, comes in modules that are put together on-site into a fully functioning plug-and-play house.

“Our typical cartridge is 3-feet wide and about 12-feet long and no higher than 10-feet tall,” Wheeler said. “That cartridge contains the structure of the house. It’s got the structural walls, the insulation in it. But it’s got all the plumbing and the electrical system pre-installed — even the cabinetry, even the finishes. It is an incredibly high-tech home. In this case, well over a $1 million home but highly sophisticated.”

The home is fully wired, a test bed for everything digital. The home is also energy positive, which means — thanks to solar cells — it produces more energy than it consumes. This while being fully functional in the Dubai desert.

“You had to maintain a certain temperature range in the home. You had to keep all your appliances working and run them nonstop for an entire two weeks,” Wheeler said. “You had to charge an electric car from the excess power you generated in the house. You had to do laundry. You had to do dishes. I mean, you had to do all these things.”

They did it, and won.

Far from being a one-of-a-kind home, Wheeler and his team say they fully expect this kind of home construction to quickly become the way homes are built in the future.

“We already have our phones, our cars, all of these pieces of technology that we bring with us that come with the expectation that they are smart,” Bobby Vance, a professor of architecture on the Virginia Tech team, told media. “But we go home and we kind of shut that all away.”

The team says this home is proof that [shutting it away] doesn’t need to be the case anymore.

Wheeler and Vance said they are in talks with a number of home building companies and are about to begin building a home that will be for sale sometime in the spring. They are also hoping to ramp up their production on a much larger scale to make their dream home a reality in the near future.